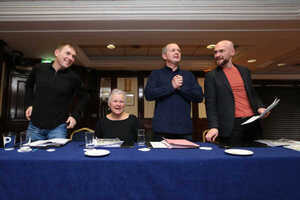 The launch of People Before Profit’s General Election 2016 manifesto (and vid, above) whose broad aim is a fairer, more equal society.

The implementation of a progressive taxation model that sees those who have the most pay the most. This will include the abolition of the water charges; the abolition of the property tax on the primary unit of family residence; the removal of the USC for incomes below €70,000.

Universal, accessible, lifelong education system, free at the point of access for all

Outlawing discrimination in access to schools on religious grounds.