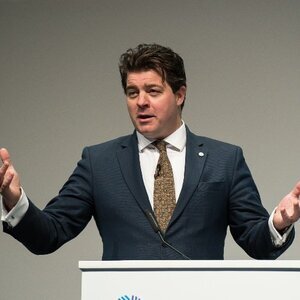 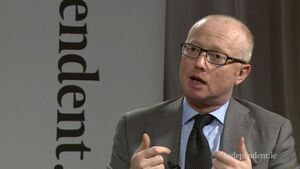 Their discussion followed Mr Halligan – ex-political correspondent with the Financial Times and former economics editor at Channel 4 News – recently writing a column headlined, ‘Why Ireland has nothing to fear over fallout from Brexit’ in The Telegraph.

Things got a little… tense.

Liam Halligan: “We’ve done trade across the Irish Sea for millennia, the idea that Britain and Ireland couldn’t strike an overarching bi-lateral trade deal, if there was a British exit, is simply nonsense. We traded through thick and thin, through hatred, jealousy, enmity, nothing has ever stopped the constant ebb and flow of commerce between people across the Irish Sea because it makes sense for both sides, to the existence of people like me who are citizens of both countries, somebody with a lot of Irish blood, who knows Ireland well, is testament to that. The UK has a huge trade surplus with Ireland so Britain has every single incentive to strike a trade deal if there was a Brexit.”

Sean O’Rourke: “Despite the fact that a recent report prepared, and you allude to this yourself in your column on Sunday, for the Irish government,  it indicates we could see a serious drop in trade?”

Dan O’Brien: “Look Liam I’ve never met you and I don’t mean to sound controversial or, or aggressive towards you but you don’t know what you’re talking about, I’m afraid to say. When you join the European Union, you give up the right to trade deals with other countries, that’s how it’s been since 1950s. The notion that Ireland can do a bilateral deal, a country-to-country deal with Britian, if it leaves, is simply factually incorrect, OK? Further than that, the Lisbon Treaty, that’s also the same with foreign direct investment. That’s exactly why Britain doesn’t have a trade deal with the United States, what’s being negotiated now the TTIP, is something that’s negotiated between Brussels and Washington. London does not have a trade deal with America, Ireland does not have a trade deal with America, you cannot have a trade deal with a third country when you’re in the EU. So, you simply don’t seem to understand that fact. So for you to come out and say it’s nonsense and scaremongering, when you don’t understand the very basics of trade diplomacy, is quite shocking.”

Liam Halligan: “I just don’t buy it. People get very hot under the collar about this. A lot of people’s livings depend on the European project. A lot of people have devoted their lives to the European project. They don’t like to be proved wrong or even entertain the fact that somebody could have a different point of view from them. If they’re, you know, we were told that the Euro was forever, remember? Oh you can never leave the Euro.

Now it’s completely clear that countries can leave the Euro. We were told the Stability and Growth Pact and Schengen would always hold. Then the facts on the ground change and the rules change. It strikes me that Canada’s just struck an incredible deal with the European Union, the European Union will be under extreme pressure if there is a Brexit. There will be a loss of credibility, it will have to scramble in order to stop other countries form leaving the European Union. And, in that political vacuum, a country like the UK, the world’s fifth biggest economy, will be able to do trade deals with countries where it has very, very strong commercial links. Not least the Republic of Ireland.”

Sean O’Rourke: “And what about, Liam, what about Dan’s point – whatever about the Irish and we would be very well disposed to continuing the relationship that’s there – other countries might not be so well disposed for example, France.”

Halligan: “Of course, in the immediate aftermath of a Brexit, if there was one, or a Brexit vote and the polls are suggesting that that’s a very real possibility now, then of course there will be an uncomfortable period. The political establishments of France, Germany are very, very closely wedded to the European project. But, you know, across the European Union, look out of the window, look at what’s happening in the opinion polls. There’s a lot of Euroskepticism out there. Some of it is pretty ugly and takes the form of discomfort towards immigration. Some of it is based on the fact that countries feel they’re losing their sovereignty. Look at what we saw in Greece, for instance. So it strikes me that we should stop insulting each other and actually have a conversation about what could happen if there is a Brexit because that could easily be the stated will, the democratic will of the British people.”

Dan O’Brien: “And Liam, we fully respect that. And this is not a thing about insulting. We’re entitled to…”

Halligan: “You came out pretty aggressively there, Dan, I have to say. [Inaudible] judges conducted themselves more politely than you…”

Halligan: “And I’m saying is that the political facts on the ground are saying the rules will change. We have had a series of massive rule changes within Europe where previously, almost semi-religious ideas have been blown up by political reality.”

Halligan: “The Stability and Growth Pact, Schengen, look out of the window.”

Halligan: “I don’t know what I’m talking about even though I’m suggesting something..”

Halligan: “The Republic of Ireland does 19% of its trade with the United States, the US wasn’t a member of the European Union last time I looked.”

Halligan: “The Republic of Ireland does 19% of its trade with the United States, the US wasn’t a member of the European Union last time I checked.”

Previously: Rule Number 1: No Touching Of The Hair Or Face

37 thoughts on “‘You Came Out Pretty Aggressive There, Dan’”