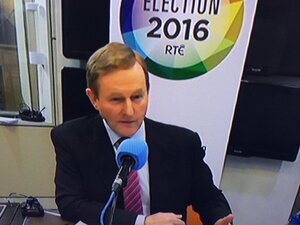 They discussed, among other things, the reported comment from a key Government strategist that “we will scare the shit out of them in the last 10 days” and the FG/FF will they/won’t they.

They also talked about his election promise to abolish USC, and how both Finance Minister Michael Noonan and junior finance minister Simon Harris missed two days of meetings in Brussels about the global markets.

While discussing Minister Noonan, Mr Kenny wasn’t asked about the report in yesterday’s Irish Examiner about barrister Garry O’Halloran’s claims that Mr Noonan ran away from a meeting to discuss concerns about sex abuse involving children at the Fine Gael Ard Fheis in 1997.

Enda Kenny: “I don’t take much notice of polls, I’m always an optimist. General elections are always about a real fight, a real challenge, I’m up for this. Obviously, the challenge for me and for the party, is to explain to people over the next nine days what is on offer here. And what is on offer is a Government of stability with a very clear plan, create the 200,000 jobs, reduce taxes and invest that back for the employment of people and things are around the country that people need: primary care centres, schools and so forth.”

Sean O’Rourke: “OK, we’ll come back to some of those details but Frank Flannery, for instance, said you’re not explaining your case properly. We saw Richard Bruton warning in the Independent today, we could end up like Greece, Leo Varadkar saying ye mightn’t even be the biggest party, warning of instability. It’s all in line with a quote from Government strategist in the [Sunday] Business Post – “we will scare the shit out of them in the last 10 days”. So, Taoiseach, what’s your scare story this morning?”

O’Rourke: “But this slump, the slump?”

Kenny: “My proposition, Seán, is that for the last five years, we were given a mandate, handed a pretty tough card, we’ve moved the country in the right direction, we still have to complete that job. So what I want to say to people all over the country is there’s a proposition on the table here for a clear, stable Government that will deliver on a costed plan, that will create benefits for everybody. I think, I think the weakness that I’ve had in the argument to date is to translate the recovery into what it means in every part of the country in people’s lives. And I can see that beginning to emerge with, the people have come back from Australia, and the Christening was at home, not away, but he said it’s not about monetary value, it’s about emotional reunification…and they’re coming home, Seán.”

O’Rourke: “But at the same time, the papers today are full of these scare stories being put out by your colleagues in Cabinet. Now how much of that is due to the Tory influence? Because we know your people spend time in London, studying their methods…”

O’Rourke: “… and they succeeded by warning the people that a vote for Labour was a vote for the Scottish nationals.”

Kenny: “Oh for god’s sake, you study elections all over the world and who does what. I mean people are clued into American television and American elections. Also you’ve had elections in Britain, you’ve had referenda in Britain, and all, people who are interested in politics and these things. Our challenge here is on the 26th, there will be a general election. The people are making a choice, what do they want? My proposition is for a stable Government to that recovery to translate it into benefit for everybody.”

O’Rourke: “Yes, but the difficulty is maybe what really scares people is the idea that you will not do all in your power to give the Irish people a stable government with the results that they give you on the 26th.”

O’Rourke: “But the numbers, they’re not pointing that way…”

Kenny: “It’s not just a list of promises, this is a costed plan. Because the more, when you reduce taxes, you take in more. So therefore you create more jobs. All of the parties are talking about spending money in the future. The only way you can have that is to have a process, is to have a programme that you can create the jobs, reduce the level of taxes and the USC abolition is a central feature of that and thereby invest that in…”

O’Rourke: “Yeah but you’re basic contention seems to be that, you know, you reduce taxes and you take in more. Now what’s that based on? Because maybe this explains why people are not swinging around and supporting you and why there has been a slump because Fine Gael traditionally is associated with prudence, with sound finance, with stability and at the same time you’re offering people and this has more echoes really with the election campaign of 2007, you’re offering them, effectively, tax cuts, you’re offering them extra services and people see, look, this doesn’t really add up.”

Kenny: “Sean, we set out five years ago to create 100,000 jobs. Everybody said you can’t do this, it won’t work, you’ll never achieve it. But that’s what did happen. A central feature of the next programme, to create 200,000 jobs is to abolish the universal social charge because that creates more jobs, when you lessen the range of tax that are there. You then have more coming into the economy from those jobs that you invest in, in employing teachers, primary care centres, doctors, gardai, nurses and so on.”

O’Rourke: “You honestly think we can afford this? Because again, all, well I won’t say all, a lot of very wise economists, varying from the Fiscal Advisory Council to people like Colm McCarthy, are warning you and your colleagues that public debt in Ireland remains at a very high level. It could compromise our access to the markets, given the jitters that are there. It wouldn’t take a whole lot, Karl Whelan is saying that fiscal space, that can change very very quickly.”

Kenny: “I love the economists, even Joseph Stiglitz said out to me in Davos, Ireland was the best of the lot. If we moved in a different direction, we’re further down the road than we should be. Still a long journey to compete. But the point is that, in order, to have the 200,000 jobs, a central feature is abolish the USC, you reduce the level of ta-, you create more jobs and reduce the level of taxation paid in those. That’s why we’ve had the 100,000 jobs created…

O’Rourke: “As recently as last week, and again amidst all of this uncertainty, there was a meeting of the Ecofin ministers, the European finance and economic ministers in Brussels, two days, it was to address the global markets meltdown. No Michael Noonan, no Simon Harris. Why?”

Kenny: “I don’t know. Obviously, the issue that was, the issue may have been finalised before anybody attended, I don’t know, I can’t answer that for you. I’ll speak to Michael later on.”

O’Rourke: “This is the kind of thing that you used to remonstrate Fianna Fáil for…”

O’Rourke: “Is it acceptable to you that neither the minister nor the junior minister attends a meeting of that importance?”

Kenny: “I much prefer all ministers to attend all meetings. There must have been a reason for this, I’m sure somebody else…it is true to say that I did remonstrate before with Fianna Fáil for missing numerous meetings over the years. This is not a situation that I like. But I do make the point, I’m going out myself on Thursday and Friday, if you like, to defend the situation that we’re in now here where the proposals for Brexit are being put on the table but the British Prime Minister. I support this very strongly. That Britain should remain a central part of the European Union and I’m going out there to defend our interest and put our case very strongly to the colleagues around the table at the European Council.” 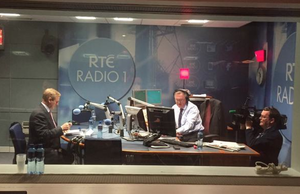 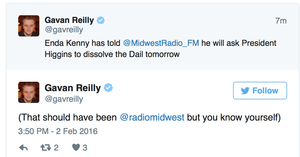 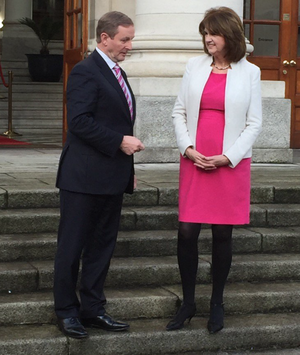 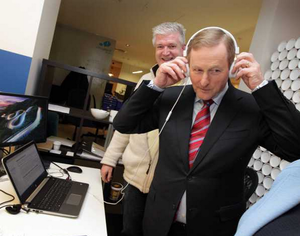 27 thoughts on “‘When You Reduce Taxes, You Take In More’”