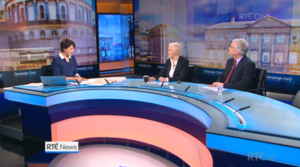 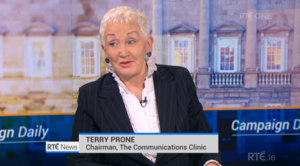 Asked yesterday if he regretted making a comment about ‘whingers’ in his Mayo constituency, Taoiseach Enda Kenny fulminated:

“No I don’t. Some of them wouldn’t know sunshine if they saw it.”

Chairman of The Communications Clinic Terry Prone and Stephen Collins, political editor of The Irish Times, shared their impartial thoughts on this with RTÉ’s Keelin Shanley on RTÉ One’s Campaign Daily yesterday.

Readers may wish to note that the close links between Ms Prone’s Communications Clinic and Fine Gael were never mentioned during the item. G’wan the RTÉ.

Keelin Shanley: “Is that a good idea? To go to your own constituency and say that you’re champion whingers? Not all of ye, but some of ye?”

Terry Prone: “Well, I think that there’s a certain truth in what he says in a general, geographic sense…”

Shanley: “But do you need that truth at this point?”

Prone: “Joe Duffy could not survive on a daily basis, were it not for the fact that the Irish public are the most magnificent whingers. I think that it indicates something that is profound in this campaign that I think it was believed, at a strategic level, in Government, from both parties, that yes, the recovery had happened and any places that it hadn’t happened, it was purely geographic. There’s a lot of individual people who have not been reached by it, who are complaining very loudly and they need to be sensitively addressed in the coming week.”

Shanley: “And do you think that was sensitively addressing them, Stephen?”

Stephen Collins: “Well, the whingers, I think we are a nation of whingers, it’s been, going back to James Joyce, we’ve always, I think even recognised in ourselves that we like to whinge. Some people, of course, have legitimate reasons to whinge, some people don’t. But they whinge nonetheless. As Terry says, where would Joe Duffy’s programme be without the whingers of Ireland. But it’s probably not a great idea to say it but I’m not sure…”

Shanley: “If you were teetering and you got called a whinged, I don’t know that it would work for me.”

‘Enda Kenny Has To Go’

52 thoughts on “Who Dares Whinge?”