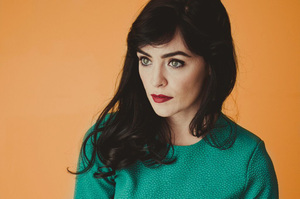 01. A gentle piano ballad that brings the best out of the cool, breathy voice of Karen Sheridan, a.k.a. Slow Skies, Winter Night released last week on Dubland-based Paper Trail Records.

02. Working with producer Conal Herron, whom she met while studying music in London, the pair have struck up a working relationship on previous singles that continues here, contrasting a strong voice over delicate keys and strings.

03. Says herself: “Winter Night is about trying to capture a place in time or feeling you once had and wanting to hold on to it, not wanting to move on from it. It’s that feeling you have where you wish you could go back in time and just be in that moment or feeling again. It comes from a place of longing”

04. The single follows a busy 2015, including working closely with Cork audiovisual stable/label Feel Good Lost on live appearances in Ireland and Iceland.