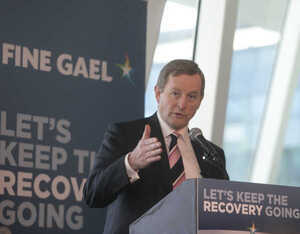 The whingers among us have been indulged by a political class willing to say or do anything to get and to stay elected.

It could yet be the Enda Kenny’s finest contribution to Irish politics to have brought about a much needed public debate on the art of whinging.

Of course, in the context of general election, he was wrong to say it. It was seen, justifiably, as an attempt to shut down criticism.

Any criticism. If criticism can’t be voiced during an election campaign, in the face of a failed political system and a self congratulatory government, when can it be?

In a less contentious environment the role played by whinging and those who whinge should be subject to a more critical evaluation.

There are a number of things that whinging isn’t. It isn’t a cry of righteous indignation nor is it a plea for social justice. What makes whinging different from other, more legitimate, forms of protest, is that it is inherently self centred and antithetical to the common good.

Our politics have really suffered from the belief that those with the loudest voices, or with particular bargaining power, should be dealt with first. The converse is more likely to be true – those who are least likely to be heard suffer most.

Why do we allow whingers to set political agendas when there are so many more important things to be angry about? Homelessness, income inequality, the lack of social mobility and yes damn it climate change.

Some of these issues haven’t been mentioned at all in the election campaign, others have just been peripherally. Issues such as the quality of our collective approach to mental health, or the prevalence of suicide in our society, have been marginally more mentioned but have hardly been mainstream.

The classic whinger will reduce all of our society’s woes into one particular issue. An issue that affects them and largely them. Alone. There is no wider picture. There is no long term thinking. Here we are now entertain us politics has reached its zenith.

This isn’t necessarily the fault of the electorate. The whingers among us have been indulged by a political class willing to say or do anything to get and to stay elected.

So how do we break this cycle? How do we find a better place on the spectrum between those polar opposites of traditional expectation and fashionable disregard? We could challenge our own shibboleths by not necessarily supporting those who tell us what we want to hear most. Those we find more annoying at least have the capacity of surprising us least.

Capacity, competence, the ability to go against the grain; the certain vote losers of the past should be the qualities we identify with more. There won’t be a revolution but we may be inching towards a type of politics where values, ideas and policies hold greater currency.

The plutocracy of those who were meant to offer political choice in this country, that unholy trinity of Fianna Fáil/Fine Gael (certainly spawned from the one zygote) and the Labour Party (now wholly lacking in spirit); who collectively once won 98% support of the electorate but together now struggle to pass 50%, no longer hold sway.

We seem, at last, to be evolving into a philosophically based, policy driven system found in most mature democracies.

Of itself this new dispensation won’t necessarily be better. It won’t offer any guarantees that our path to Nirvana has to divert, once more, through Hades. At best it should stop us whinging that we’re any better or worse than anywhere else.

18 thoughts on “The Fine Art of Whinging”