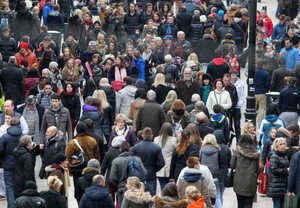 The ‘squeezed middle’ are used to blame low-income groups of being a burden on average earners and, therefore, argue for cuts in both social protection and taxation.

This is far from the reality.

Seamus Coffey, of University College Cork, has been digging up some more numbers which he self- deprecatingly refers to as one more ‘silly addition’ to what can be done with income distribution statistic.

But silly they are not. They give insight into another aspect of Ireland’s income structure.

When we debate income distribution we usually do so through the prism of the relationship between the ‘top’ and ‘bottom’ income groups or the Gini co-efficient.

What Seamus looks at are the fortunes of the middle income group and specifically compares Ireland with Sweden in the middle deciles (a decile represents 10 percent of the population).

I have reproduced Seamus’s table below but if it is difficult to read you can access it here. 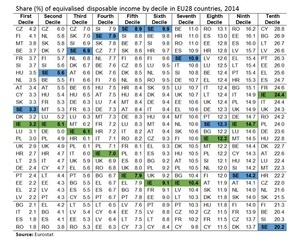 The numbers measure the percentage of ‘equivalised income’ each decile receives (equivalised factors in household size).

In the table we see that in green Ireland, the lowest 10 percent income group receives 3.2 percent of all income; the top 10 percent receives 24.4 percent – or nearly a quarter of all income.

Regardless of the magnitude, there is nothing surprising in this. Top income groups take more than low-income groups.

However, Seamus points us to the middle of the decile group – what has been described in the debate as the ‘squeezed middle’ and compares us to blue Sweden.

There is a huge gap between the two countries in these middle deciles – 4th to 7th. Indeed, if Irish squeezed middle households took as much of a percentage of total income as Swedish middle decile households, each Irish household would be, on average, €5,000 better off. That’s a nice tidy sum.

Using the Eurostat data here is my own take. Rather than compare Ireland to Sweden (Sweden is pretty egalitarian but they’ve been at it for decades), I compare Ireland with the average of our peer group – other small open economies: Austria, Belgium, Denmark, Finland and Sweden.

And since I’ve used the middle 60 percent in the past I’ll keep to that and calculate the income for households in the 3rd to 8th decile. That’s a bigger middle. 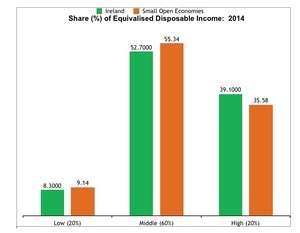 Ireland’s low and middle income groups are below the share of those same groups in the other small open economies.

However the Irish top 20 percent group take considerably more than their counterparts in the other five countries.

What does this mean in Euros? If Ireland had the same share of disposable income:

Households in the lower income group would receive, on average, an extra €2,200.

Households in the middle income group would receive, on average, an extra €2,300.

Households in the high income groups would, however, lose on average €9,100.

Of course, one could argue that the real issue is not the share of total disposable income but rather how much income. You can be more equal but a lot poorer.

So let’s look at the top cut-off point for each decile (the point at which you enter the next highest decile) measured in purchasing power parities to factor in currency and living costs. 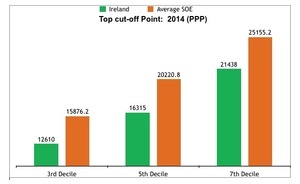 Other small open economies are more equal and more prosperous. Irish households are between 14.8 percent below the other countries (7th decile) to 20.6 percent below in the 3rd decile.

When income inequality is mentioned the first that many people do is reach for Robin Hood’s bow and arrow. Yes, it’s good to be well-armed but there are other issues besides tax and redistribution.

Here are two that might help explain the gap.

Trade union density and collective bargaining have been show to increase workers’ wages.

Frank Walsh of UCD estimates that workers in trade unions engaged in collective bargaining are 8 to 10 percent better off than their non-union counter-parts in a like-for-like comparison (occupation, economic sector, workplace size, etc.).

For instance, if you become sick and your employer doesn’t have a sick-leave plan, you have to wait for a week to get Illness Benefit from the Social Protection Department and then it’s only €188 per week. In other EU countries you can start to receive sick-leave after the first or second day and they are income-related, covering up to 70 to 80 percent of your wage.

Or take maternity leave: in Ireland it’s a flat-rate of €230 per week. In other EU countries, up to 100 percent of the wage is provided.

A strong social protection system – that protects people both in work and out of work – helps maintains income during periods of illness and injury, temporary unemployment, maternity (and paternity) leave and retirement. That could be another contributing factor in supporting middle income groups.

There are some who use the ‘squeezed middle’ trope as part of ideological discourse that seeks to blame low-income groups of being a burden on average earners and, therefore, argue for cuts in both social protection and taxation. This is far from the reality.

You want help the ‘squeezed middle’? Increase labour rights in the workplace and build a strong social protection system. That’s an agenda for all workers.

19 thoughts on “Unsqueezing The Middle”