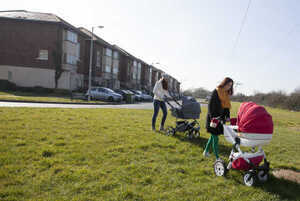 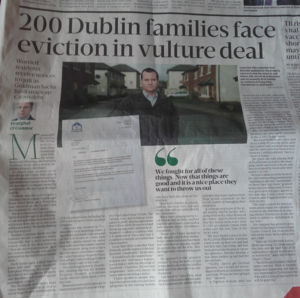 Twinlite – a property company owned by developers Michael and Richard Larkin – sent letters informing the families that they have to leave the properties, after a Goldman Sachs vulture fund bought an €89million loan secured on the homes by the Larkins, from Ulster Bank.

The €89million loan was secured on Tyrrelstown’s local shopping centre, ‘a significant’ land bank in the area, and the 208 houses in Cruise Park which the Larkins rented out.

“The Larkins, Davy [Stockbrokers] and Goldman Sachs signed a profit-sharing agreement that will see all the houses sold and the shopping centre ultimately refinanced to allow a Goldman exit.”

Some families have been renting the homes for up to 10 years.

Further to this, business editor of the Sunday Business Post Tom Lyons spoke to Keelin Shanley on RTÉ One’s Today with Sean O’Rourke Show earlier, about the wider implications of this move.

Keelin Shanley: “This is just one incident here. I heard David Hall, on Morning Ireland earlier today, talking about a potential 47,000 homes that could be in a similar situation. I mean, is that accurate?”

Tom Lyons: “I would have thought, it sounds, if anything, conservative. If you look at the type of numbers we’re talking about, you know, we know that IBRC, the former Anglo Irish Bank and Irish Nationwide, you know they offloaded about €20billion, Ulster Bank, it would be €9billion, Nama, sales to actual vulture funds, in Ireland, you would have thought that’s somewhere around €10-€15billion and then you’re looking at Dankse, KBC, Bank of Scotland Ireland, that’s another €5billion. These loans are not only secured on people’s homes, they’re also secured on investment properties and SMEs. But because everything is linked together, you know, if you see a vulture fund move against an SME, chances are they’re going to default on their mortgage. If you don’t have a job, or your company’s been taking away from you or you’re working for one of these companies which suddenly you find yourself being fired, you can see that this could have a massive ripple effect.”

Lyons: “Far beyond just the straightforward high residential mortgages being acquired by a vulture fund.”

Shanley: “And Tom, just to be absolutely clear, I mean if we’re talking David Hall’s figure, say, 47,000, you think it could be even more. Some of those mortgages, they will have people in the homes, they are paying their mortgages, are those people safe?”

Lyons: “Well, in theory, like there are protections around your home. But it’s very easy to default and we’re talking about, if you look at AIB or Bank of Ireland – they can see ‘we’re here for the longer term’ and whereas if you’re talking about a vulture fund, these are companies which are acting on 3, to 5, to 7-year horizons.”

Shanley: “They’re a quick hit, so if for example, you know have your mortgage arranged, you can afford it, you are paying it, but in the past you had some issues around it, are you vulnerable?”

Lyons: “You should be OK if it was in the past. But if it’s meant that there are payments outstanding, suddenly these funds can start saying ‘hang on, these are your missed payments, you need to start paying for these’. And that could put people under pressure. There are any number of things that could put people under pressure but these funds have got relatively short-term horizons and they have aggressive investors who are looking for big returns.”

Shanley: “And this is the beginning, would you say, of what we’re seeing here?”

Lyons: “I would have thought it is just the beginning and I think it’s something that was absolutely inevitable because of the way that we decided to solve the crisis which was to ‘let’s sell everything to these big funds’. These big funds, they’re not here for the long term and they need big returns to justify the risks.”

Shanley: “So you’re saying it’s Government policy. The Times is reporting today that 90% of asset disposals by Nama were to vulture funds like this so it’s vast quantities of money.”

Lyons: “It’s absolutely vast, it’s tens of billions ultimately when you add it altogether. I mean it has been a massive transfer of money, assets, loans and power to a relatively small group of funds, probably seven or eight of them and they are now incredibly powerful. They can do things, like they now own, in certain parts of Dublin, they would own 80% of apartment blocks. So if you’ve got that, you’ve got market dictating power and there’s things you can do with rents, there’s things you can do with terms of deciding when and where do we sell, they own an awful lot of sites, so they can decided when and where do we start building the new houses.”

Shanley: “Any easy solution? We’re going to be talking about this later in the programme but, at this point, is it just you’re on a  roller coaster or is there a way to halt this?”

Lyons: “Well we decided a number of years ago that this, we’re going to put ourselves on this roller coaster and trust these funds are going to act correctly, and ethically, and it’s a fact that many of them have but as they get towards the end of their funding cycle, when they’re looking at returns, I think they’re going to start taking much tougher and tougher decisions and we’re really getting into that period of time round about now.”

Also in yesterday’s Sunday Business Post, Mr Lyons reported that Nama sold Dublin’s Clarence Hotel to a consortium including Bono and the Edge without inviting any other bidders to tender for the hotel.

“The hotel is understood to have been sold for less than the total debts of the company which previously owned it. Last year, another State agency, the Dublin Docklands Development Authority, sold U2’s former recording studio for €450,000 to the band without a public tender.

“The transaction was later investigated by the Public Accounts Committee amid allegations the site could have fetched more on the open market, a claim denied by the DDDA.”

Listen back to Today with Sean O’Rourke in full here

Richard Larkin has spoken to Joe Duffy on Liveline this afternoon and is disputing the story in the Sunday Business Post.

“We don’t want to be in the rental business anymore. The only way to do this is to sell the houses. And we’re not selling them off in one big bunch to some investor. We’re selling them off one-by-one to families who are coming in here, who want to make their home here in Tyrrelstown.”

“As a developer we don’t have any debt at all. This rental property is held in a property fund, called EPS, that we manage the assets for. Now that company has a loan that they owe to Goldman Sachs but Goldman Sachs don’t know anything about this. I mean the first thing Goldman Sachs heard about this was on Sunday when the read the Sunday Business Post.

“We’re talking a very small number of people and nowhere near the numbers that were thrown around by the Business Post.”

“We’ve gone to all of them and we’ve said, look, you know, it’s not always possible, people don’t always have the ability to get a mortgage but anyone who can and who wants to own their own home, we will not put it on the market we will sell it directly to them, there will be no bidding wars, there will be no anything.”

“But the other thing to point out is any of these properties, where the leases are not being renewed, the day comes at the end of the lease, if we haven’t agreed to sell that house to somebody, we’re not going to tell the tenant he has to get out. We’ll say to the tenant, ‘right you can remain there month-to-month, it’s ok, until we can find a buyer, or until you can find alternative accommodation, or until the tenant can [buy it].”

“…Their lease is going to expire and it’s not going to be renewed so if you want to call that eviction, you can call it an eviction but I mean, you know, we’re not telling them, get out of your house, we’re saying in six months time, when your lease is up, you need to find somewhere else to live.”

Listen back to Liveline here