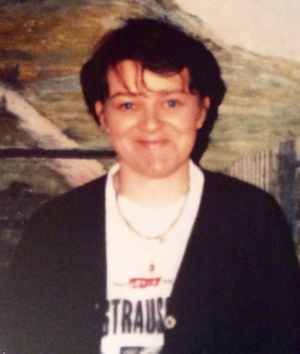 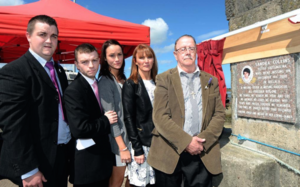 From top: Sandra Collins; Sandra’s brothers and sisters David, Patrick, Mary, Bridie and stepfather Joe at the unveiling of a plaque in honour of Sandra in Killala, Co. Mayo in August last year

Sandra Collins was pregnant and ten days shy of her 29th birthday when she was last seen outside a chipper in Killala, Co. Mayo, at around 11pm on the night of Monday, December 4, 2000.

At the time of her disappearance, Sandra was a full-time carer of her aunt Ann O’Grady, who suffered from arthritis and whom Sandra lived with in Killala since 1988.

Sandra’s mother, stepfather and siblings lived about 15 kilometres away in Crossmolina.

On Friday, December 1, 2000, Sandra’s GP confirmed to Sandra that she was pregnant but Sandra asked for another test to be carried out. Sandra phoned her GP on Monday, December 4, 2000, for the result of the second test which was positive.

Throughout the morning and early afternoon of that Monday, Sandra was seen, looking upset and agitated, while making – and possibly receiving – numerous phone calls from a phone box in Killala.

Later that evening on December 4, 2000, Sandra had left her aunt’s house at around 7.30pm to buy sausages in a local shop – for her and Ann – and called into an elderly neighbour, William Johnston, to see if he needed anything from the shop.

Then, hours later, at around 11.05pm, Sandra walked into the Country Kitchen chipper on George Street in Killala where she bought a large bag of chips. She was last seen leaving the chipper at around 11.15pm.

Five days after she disappeared, on Saturday, December 9, 2000, a pink fleece belong to Sandra, and worn by her on the night she went missing, was found by the Old Pier in Killala – with a packet of sausages in one of the fleece’s pockets.

Two pieces of paper were also found in one of the pockets – one with the phone number of Martin Earley and the other which had numbers of abortion clinics in Britain.

Although her body has never been found, Sandra’s family believe she was murdered; that some people from the area know who killed her; and that the fleece – and sausages – were placed at the pier to make it look like Sandra had taken her own life.

Plasterer Martin Earley, from Ballina, was charged with Sandra’s murder in December 2012. Mr Earley, by then aged 50 and a father-of-three, denied the charges.

After an 18-day trial at a Castlebar sitting of the Central Criminal Court in 2014, Mr Justice Patrick McCarthy directed the jury to acquit Mr Early due to insufficient evidence.

During the trial, the court heard Mr Earley had initially denied having had a relationship with Sandra but, in 2001, admitted to gardai that he had had sex with her on December 1, 2000 – three days before she disappeared.

It also heard that Sandra had spoken to Mr Earley by phone on the day she disappeared and asked for £1,000 from him to have a termination.

The trial also heard evidence from Michael Granahan who said Mr Earley, in March 2011, told him he had met Ms Collins in Killala on the night she went missing and that they had argued before she fell into the water by the pier in Killala.

Mr Granahan said Mr Earley said he didn’t jump in to save Sandra as he couldn’t swim.

Mr Early was married with an 11-month-old child at the time of Sandra’s disappearance.

Sandra was the eldest of six children in her family.

James died at the age of 26, following a workplace accident in a factory in June 2000, just six months before Sandra disappeared.

Since her disappearance, Sandra’s mother, father and aunt have also died.

He says it was his father’s dying wish that Patrick and his siblings find Sandra’s remains.

“One day after Christmas, when Daddy’s condition had deteriorated, he said to me, ‘will you promise me something?’ and I said, ‘I will’. He said, ‘Will you find her?’. And I said, ‘Who? the nurse? do you want me to get the nurse?’. And he said, ‘No I’m not talking about the nurse. I want you to promise me to find Sandra. If I die, and I’m not here, don’t you ever give up looking for her, until you find her. I want her bones.’”

“We just want to find her, we don’t want to send anybody to jail. I don’t want to ruin anybody’s life. If the person that murdered Sandra knocked on the door and said, ‘hello’ and I answered the door and they said, ‘here’s your sister’ and she was in a bag and they walked off their way, I would walk off my way. Then I could ring the funeral director and wake her here, like we have wanted to do for so long.”

“I believe there’s people in Killala covering for Sandra’s killer. Do they know what they’ve done to me and my family, how they’ve destroyed us? I’m begging for them to come forward, anonymously if they wish. There’s no need for anyone to get into trouble.”

“Have they lost anyone belong to them? Then gone home and tried to keep this fight going, and felt the pain of being in grief and not being able to move forward? Going to bed every night, wondering will it be tomorrow, will I find her tomorrow?”

“When I sit down and I actually think about it, it takes my breath away to think that this day 65 years ago my granny was bringing my mum into the world and, 29 years ago, Mammy was here and she was pregnant with me. Mammy was here, Daddy was here, James was alive, Sandra was alive, my aunt whom Sandra minded was alive. That’s six people who’ve died and they’re all gone. This house was full. ”

“I’m not out for vengeance. I don’t know which is worse – Sandra being murdered and being taken from us forever or the fact that they’ve hidden her body and we’ve been on this search for the past 16 years. We need to bring her home.”

“It doesn’t even have to be all of her. I know that might sound strange to people but if we got one finger or a thumb. Is there a swinging brick where a heart should be?We do believe that Sandra’s killer has feelings, that these people have feelings.”

Anyone with information may call the missing person’s helpline, 085 2092119 or contact Patrick via Broadsheet@broadsheet.ie

Have You Seen This Fender Telescaster?

4 thoughts on “The Search For Sandra Collins”