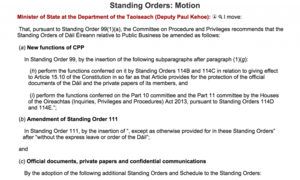 The introduction of a “new protection” for “private papers” in the Dáil on December 17, 2015, by Fine Gael’s Paul Kehoe

An appeal to get access to the invoices and receipts used by TDs and Senators for claiming their expenses has, perhaps unsurprisingly, been unsuccessful.

In their internal review, the Oireachtas has upheld their original decision that these documents are “private papers” and therefore exempt from Freedom of Information legislation.

They have also pointed out that there is now a “new protection” for these documents in the form of standing orders quietly introduced on the final sitting day of the Dáil last year.

These standing orders were adopted on December 17 and printed on 28 January 2016, just a week before dissolution and the start of the general election campaign.

Previously: How They Took Back Your Freedom