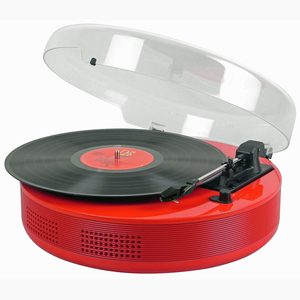 To celebrate Record Store Day last Saturday, Golden Discs offered us a Red Steepltone Discgo turntable (as above) to giveaway to a vinyl-coveting Broadsheet reader.

Consequently we asked, what was your first wax purchase?

You answered in your hundreds (mostly blokes).


Dudley: “My first ever purchase was a two-fer, in Golden Discs in Dun Laoghaire in about 1986 or 87.Queen – A kind of magic, and because I had the exact change left over in the gift voucher for it, Chris de Burgh’s greatest hits. One of those records changed my life forever. *waves from stripper pole*

Daddy Wilson: “My first ever vinyl purchase was Nirvana – Live From The Muddy Banks of The Wishkah, the first vinyl I owned/inherited from a collection in my parents’ attic was a Beach Boys live album. The next vinyl purchase was Radiohead: In Rainbows. Each of these albums holds pride of place on a shelf in my bedroom in my parent’s house. None have ever been played. Not even the old Beach Boys record!
The worst part of this? My daughter was born a few weeks ago and the first music she’s ever heard was Beach Boys, but she’s only heard it through online streaming!
The only thing that calms her now is listening to the Beach Boys and dancing with her Dad in the kitchen! It’d be great to be able to have our Beach Boys record spinning for her to look at while dancing.”

Ricardo: “My first ever vinyl purchase was Chris de Burgh’s Lady in Red single. I got it for my first true love the day before she returned to London after spending her summer holidays in Ireland. Ahhhh….1986, the summer of love.”

Father Filth: “My first ever vinyl record purchase was Queen’s – ‘Flash’ single, in the then supremely plastic-y orange branch of Golden Discs in Dún Laoghaire [Co Dublin] Barely able to view the top of the counter, I was a nipper, my Dad had to lift me up. Played until it was scraped clean of any audio grooves, on a Bush turntable from the 60s, with a stylus like a cat’s tooth…”

Garthicus: “Here goes (I’d really like that prize!): My first ever vinyl record purchase was… The Dirty Dancing sountrack… I was around 8 years old…”

Always Wright: “My first ever vinyl purchase was “Automatic for the People” by REM. I played it on Dad’s turntable, which was downstairs. To enjoy it fully I felt I needed to retreat to my own lair, which was upstairs. I turned the volume up and listened to that record for a solid year, muffled and magical, through my bedroom floor. It doesn’t sound as good any other way.”

Nathan Ketharinath: “My first ever vinyl record purchase was Lana del Rey’s Ultraviolence. I still don’t have a record player to properly make use of my few vinyls but I’d love the chance to do that someday!”

Liam Zero: “My first ever vinyl record purchase was Full Circle by The Doors. At the time, I was bitterly disappointed with the album because Jim Morrison wasn’t on it… ironically, I would now consider not having Jim Morrison on an album to be a major plus point. Doesn’t make Full Circle any less rubbish of an album though. God it stinks. And I still own it.”

But there there could only be one winner.

“My first ever vinyl record purchase was Disney’s Snow White and the Seven Dwarfs.

This was when I was a small child in the 80s, living in London with my parents and my paternal grandmother. My parents were broke 20-somethings who hadn’t really expected to be parents when I came along (hence living with my Nan). They were too poor and too busy saving money to move out on their own to afford any newfangled contraptions like cassette players. But we did have my father’s record player, which was his pride and joy. He had bought it with the money he earned from a summer job when he was sixteen, just after his own father had passed away. And he had survived through his grief, and through my Nan’s remarriage to an extremely unpleasant man, by listening to records and losing himself in the music.

My father particularly loved to listen to Bob Dylan and I liked to sit on the floor of my Nan’s back room and listen with him, though I didn’t really understand any of the songs. Once we were listening to “Knockin’ On Heaven’s Door” and I asked him.. “who’s Kevin and why is he never at home?” This prompted something of a crisis for my father, given that both my parents were staunch atheists, my Nan was a staunch Catholic, and nobody had yet worked out how to explain the complexities of this situation to a four year old.

Every weekend my Nan would creep up to my bedroom after I’d gone to bed and empty out her purse. She’d give me all her small change and I would marvel at this shiny treasure, stockpiling it in a little leather purse she had given me and feeling like the richest kid on earth. My parents didn’t know. This was our secret, and it made me feel so special and important to share something with her that nobody else knew about.

One Sunday afternoon, my parents and I were wandering down the Broadway when we popped into a charity shop because my mother liked the look of a hideous fuzzy jumper with oversized shoulder-pads and a floral pattern.

My father went to look through the LPs, drawn to them as he always was (although he hadn’t bought one since I was born and he had developed Responsibilities with a capital ‘R’). I went with him and copied him, flipping though the records like I knew what I was doing. And that’s when I found the Snow White soundtrack. A record just for me. And I had to have it.

“Absolutely not”, said my father “that record player is for music – real Music!” (with a capital ‘M’ – he was and still reamins a purist about these things) And so he refused to buy it for me and we argued and my mother was summoned to intervene. And just when it looked as though he had won, I pulled out my ace-in-the-hole. My leather purse. My Nan’s secret treasure. Just enough to buy the record. And my father was beaten.

I listened to that record every day until we moved out and moved to Dublin and the record player had to be left behind because it was too big to bring along. My father stored it in the attic of my Nan’s house, whispering sweet nothings to it as he did, telling it he would come back for it. I think the only thing he was glad of was not having to listen to that damn Snow White record again.

And then, suddenly and sadly, my Nan passed away. Her horrible husband wasted no time in throwing out all my her things and all my father’s things and putting the house up for sale. And the pain of losing my wonderful Nan was, for my father, all the worse because the one symbol of what had kept him going through his father’s death – that record player – was gone now too. He had lost both his parents and his pride and joy.

He still has the records though. Inexplicably he brought them with us when we moved to Dublin. Like he wanted them close to him. If I win this turntable, I’ll give it to my father. And we can sit on the ground together and listen to ‘Knockin’ On Heaven’s Door’.”

Previously: All Hands On deck 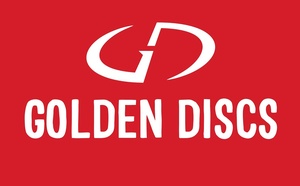 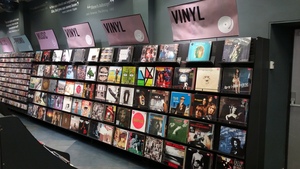 This Is Dedicated To The One I Love

24 thoughts on “Our Golden Discs”