#EU deportations from #Greece to #Turkey were rushed, chaotic and against the law. https://t.co/y8pJZZ5rvN pic.twitter.com/uamJmthRDK

Human Rights Watch released a report today in relation to the deportations that have taken place from Greece to Turkey, as part of the EU/Turkey deal – of which Ireland has contributed €22million.

The report paid particular attention to Chios island where the UN claimed 13 people – 11 people from Afghanistan, and two people from the Democratic Republic of Congo – were wrongly deported on April 4.

In visits to the VIAL detention center on Chios on April 7 and 8, Human Rights Watch spoke with 12 friends and one relative of 19 Afghans who were deported from Chios on April 4.

Based on those interviews and text messages exchanged between those interviewed and the deportees, Human Rights Watch documented an array of irregularities and violations.

The authorities did not inform people that they were going to be deported, did not tell them where they were being taken, and did not allow some of them to take their personal possessions.

According to the UN Refugee Agency, thirteen of those deported from Chios had expressed a desire to seek asylum in Greece, and that number could be higher,

The Greek authorities appear to have hurried the forced returns from Chios, and the 136 other deportations that day from the nearby island of Lesbos, to meet a publicized deadline for the start of returns under the ill-conceived EU-Turkey deal that went into effect on March 20, 2016.

…The deportations from Chios began around midday on April 3, when Greek police at the VIAL detention facility took dozens of people to the main building [Tabakika] where police and Frontex register new arrivals, and where the Greek asylum service is located.

The authorities separated the 66 people they had identified for return, witnesses said. The 12 friends and one relative of the 19 deportees, who did not want their names published, told Human Rights Watch that the police had called people on the false pretext that they were to be registered, including for asylum.

“Salim,” a 24-year-old man from Afghanistan, said the police took three of his Afghan friends, Ilias Haqjo, Mohammad, and Reza (full names unknown), all between 20 and 25 years old, without their possessions.

“They came here and told them they have to go to register,” he said. “They left happy and when they came out the police were waiting for them…. If the guys knew they were going to be deported, they would have taken their bags, their papers, their money.”

…On the other side, in Dikili, Turkey, the authorities hung blue tarps on the fence around the registration tents to block journalists and human rights monitors from contacting the deportees. The police commander at the area denied a Human Rights Watch request to access the site.

The deportees were then loaded onto buses and driven away. Police at the site told Human Rights Watch that they were headed to Kirklareli, near Edirne, and the media subsequently reported that the people deported from Greece were being held at the Pehlivankoy removal center in that town.

The deportees on the buses in Turkey, however, seemed not to know where exactly they were going. “Now we’re in the bus, they’re taking us to a camp,” Mohsen Ahmadi wrote his friend “Amir” around 3 p.m. “Why there?” “Amir” asked. “I don’t know, the camp is near Istanbul,” Ahmadi replied.

…Human Rights Watch collected the phone numbers of four of the people who were deported from Chios on April 4. As of April 18, none of them had replied to messages on Viber, the application they had been using. When called, three of the phones appeared to be shut off and one of the numbers was not working.

The legal basis of confiscating phones from people being deported, if any, remains unclear. Given that asylum seekers and migrants rely on their phones to stay informed and to keep in touch with family, such measures appear unnecessary and cruel, as well as a violation of the individuals’ personal property rights, Human Rights Watch said.

‘Is Our Response To Be Defined By Barbed Wire, Tear Gas And Rubber Bullets?’ 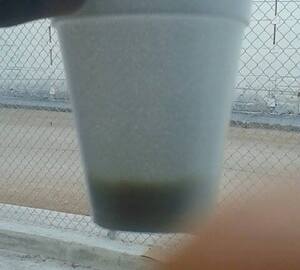 Further to the picture (above) circulating on social media last Thursday…

Patrick Kingsley, of The Guardian, reports:

Babies detained in Greece under the terms of the EU-Turkey migration deal are being denied access to adequate supplies of milk formula, refugees and aid workers have alleged.

Approximately 25 babies under the age of six months, whose mothers are unable to breastfeed, are being given roughly 100ml of milk formula just once a day on the island of Chios, according to photographs sent by detained refugees and testimonies provided by phone.

… A 35-year-old Afghan construction manager, detained in a detention centre on Chios since 21 March, said he had been forced to mix water with bread to stop his five-month-old daughter going hungry.

The man, who said he worked as a contractor for the British army in Afghanistan but asked not to named for fear of victimisation, said: “They are only giving us half a cup of milk for all 24 hours – but that’s not enough. There’s no more milk for lunch or dinner or during the night. This is a big problem. There are maybe 24 or 25 babies under six months.”

The Norwegian Refugee Council, which maintains a presence on Chios, confirmed the claim and said the number of infant children may even be higher. “It’s clear that baby milk [formula] is not being routinely distributed,” said Dan Tyler, the NRC’s protection and advocacy officer on Chios. “I did a series of meetings with refugees last week, and mothers brought up [the issue of] baby milk all the time.

4 thoughts on “Order Out Of Chios”