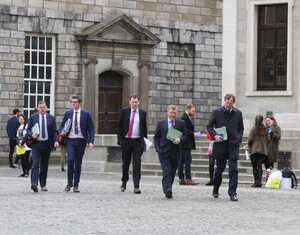 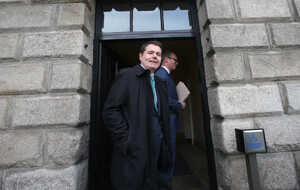 With some planning we could have a job share roster for the next Dáil session.

We’ve seen and hurd everything else. Super Majority Civil War Ententes, Blueshirt and Light Blue Independent hankies, Soldiers of Dynasty and their DNA Independents, Minority Alliances from the Pic & Mix benches; all ponsing about the Leinster House podiums, Montrose broadcast studios, and filling column inches at a rate not seen since the Armstrong Moon Landing.

Instead of Leap Year proposals, there have been more combinations and blends promoted by Enda and Mickey than at a tea taster’s convention.

The real story here is that Frilly Keane was right. The only Government that still makes any sustainable sense is FFS’Fein and their colour wheel near-neighbors; or another General Election.

The latter being exactly what the Big 3 wants by the way. FG because they want to rope in a few stray Independents onto their tickets, while FF think they have what the Yanks call Momentum “The Big Mo.”

The Shinners on the other hand want another, and more wiser, go at a General Election campaign, a campaign that will not be infiltrated and infected by Mir.I.Am O’ Call’again and all the other anti-SF product placements, and by now manners will have been firmly put on a few of their own. They also enjoy the cosy luxury of another 6 figure damages payday to lash into the election kitty.

Something else the Big 3 absolutely agree on, they want another election now so that the Independents and small party collectives and rabbles are stalled trying to raise deposits.

First of all look at this.

Once you’ve stopped lol’ing at O’Reilly’s photo or sniggering at big smuggy grin on Nash, put the two fingers down and ask yerselves. Who is doing the job of Minister for Communications, Energy and Natural Resources?

While yere at it, study that list of Ministers for State, from the 15 gigs 7 got re-elected. And one of those was Dara Murphy. Cheesus wept.

There is something fundamentally incorrect with the structure of our Cabinetry and Design of our Ministries anyway. So whoever or whatever set up gets the Seal of Office next from the Áras, t’would do them no harm to make all those jobs redundant. If fully suited and booted

Senior Ministers need a dig out, let them pick their own Juniors/ Assistants from the party benches at their disposal, and with no extras goodies like Garda Drivers and wage/ pension top ups.

With some solid Manpower planning and committed partners we just might have a Job Share Roster for the next Dail Session.

Week On Week Off would probably be more efficient for lads collecting milage, but that’s up to the various mandarins, cardigans and Sir Humphrey’s. I’m using the FF FG casting call because that’s what everyone else from The Examiner to the Marian Brunch Party Sets are using. (I wouldn’t want to upset the establishment honeys any more than I have already.)

Taoiseach / Tánaiste, Meh and Meh eile. Back and forth week by week.

Foreign Affairs and Trade : Varadkar (he’s a crap Minister but great Politician. This is the gaff for him) and Lisa Chambers. (Harmless and will look good meeting everyone from the Pope to Putin.)

Justice, Equality, Law Reform, etc etc etc Willie and Francie (she knows where the biccies are) Jim O’C and whatever local Solicitor/ Junior Council the Blueshirts quota’d in – Josepha anyone? The only objector would be Francie herself so maybe not.

Tourism Sport & Arts I’d lash John Deasy and Billy Kelliher in here. Peas in a Pod. I’d say there’ll be murder about who gets the week on when the Euros start tho’

Environment, Housing John McGuinness and Jamsie O’Reilly. And only because Reilly has big department experience and knows how to negotiate if his IMO days have a chance of being repeated. These two will kill themselves trying to outdo the other with the deals and legislation they’ll race each other to announce.

Gaeltach, Rural Affairs & Infrastructure (aka Into the Whest) O’Cuiv and Ring – no better bucks.

So whatty ye lads? I’ve even cut expense in half! But can I hand it over to ye now? Le do thoil. There are only so many times I can run up and down the FF/ FG Teachta Dálas player lists before developing a beige allergy.

Maybe consider the creation of a Commander for Broadband infrastructure. If there is to be genuine equal opportunity for all in this Country, High -Speed Broadband needs to be available to all its citizens.

By recognizing the lack of access and signal beyond The Curragh as a National Emergency we are no longer deliberately denying our communities a chance to thrive and grow.

This is not about access to WhatsApp for illegal turfcutters or Twitter for lads driving home from the club after a heavy one; this is about developing business opportunities, encouraging relocation, re-opening our small towns and villages, and promising sustainable public investment in Schools, Post Offices, Garda Stations etc to the tax payer that qualifies for a Value for Money stamp.

G’wan now. I’m not keeping a tally so I don’t care what gender the comments come in.

Before I sign off. A bitta’ve a shout out for The Wine Show. (My dream job, I’d even give up the spuds to shift that stone so I could on the road with the lads without looking too much like Clarissa Dickson Wright) ITV tomorrow and or ITV4 on Sunday. I promise ye’ll be thanking me on Monday. 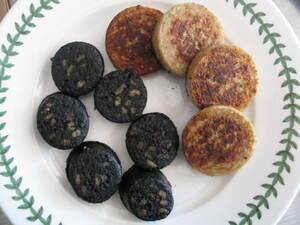 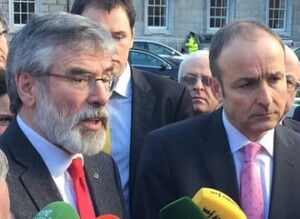