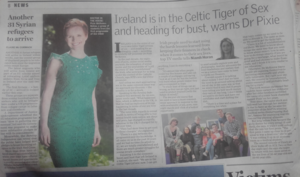 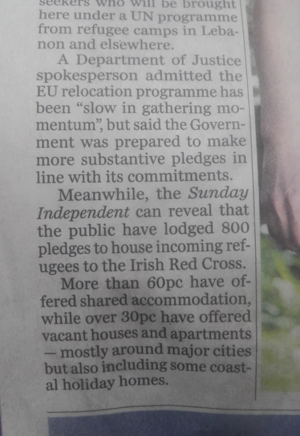 Yesterday’s Sunday Independent reported how the Irish Red Cross has been contacted by 800 people in Ireland who wish to offer accommodation for refugees.

Independent TD Mick Wallace speaking in the Dáil on Thursday, following a recent trip to the makeshift refugee camp in Calais, France.

During his speech, he implored Ireland to do more for the people languishing in Calais and Dunkirk.

Last weekend, Deputy Clare Daly, a solicitor called Gary Daly from Dublin, and I went to Calais for the weekend and spent three days there – two days in the Jungle camp in Calais and a day in Dunkirk. It is hard to be well after what we witnessed.

It is hard to be well thinking about the role that the EU is playing in the issue of refugees at the moment. It is bad enough that Ireland has been complicit by allowing Shannon to be used as a US military base. We seem to be very comfortable with it – 2.5 million troops have gone through Shannon since 2001.

Anyone who pretends to think that this is nothing to do with the refugee problem is living in cuckoo land. We have been complicit in the destruction of the homes of millions of people.

We saw the end result of it in Calais and Dunkirk last weekend. It is just horrific where these people are today. It is horrific that the EU has played such a poor role in it. Last year, we had the release valve of Germany doing the right thing and taking close to 1 million people. They cannot do it again this year. There will be a serious problem.

The EU can block all the borders it likes but the refugees will come.

In terms of the Greece-Turkey situation it will be a bit more difficult for them now there but it means there will be more of them on the Mediterranean this summer.

The deal the EU did with Turkey and Greece is shameful. We met Kurds in Dunkirk. The notion that Turks will actually arrive on islands off Greece and be forced back to Turkey is beyond thinking about.

We talked to a guy called Beshwar Hassan who is the head of a refugee council in Dunkirk. These people are afraid of their life of the Turks because of what the Turks have been doing to them.

Today in Turkey it is possible for ISIS to get direct access to hospitals and there are special supermarkets that it can access. How in God’s name could the EU take the position of allowing Turkey to play this role? We pay them for doing it.

This is not the answer to the migrant problem. Turkey will make things worse for these people and it will not solve the problem that is arriving in Europe. We are still saying we will not take people who have arrived in Europe and that they will have to be assessed outside of Europe.

We met kids of 11, 14 and 15 years of age, a lot of whom were Afghan. Calais is dominated by Afghans. There is a fear in Ireland that a lot of these people are terrorists and could cause trouble here. Afghanistan is in bits.

The pretence that things are sorted in Afghanistan is total nonsense. We met a lot of Afghans over the weekend and most of them were running from the Taliban and from ISIS. This time last year, they reckon that there were 100 ISIS fighters in Afghanistan.

Last week, they claimed that there are 10,000 of them. The Afghans that we met were at pains to point out that ISIS is now more powerful in Afghanistan than the Taliban and that the Government is a sideshow.

Most of the people we met in Calais who had to run had nothing to do with the Government, the UN or the US army, but some of their cousins had. They are afraid of their life of the Taliban and ISIS, both of which said that their cousins would have to stop doing this, that or the other or that they had done this, that or the other in the past and will pay a price for it.

They have had no choice but to get out of the country. They told us of an Afghan who, after spending six months in Calais, just could not take it anymore. He had mentally had enough of it and decided that he was just going to hand himself in and go home. He went home and was dead in two weeks. It is not a safe country to return anyone who has run out of the place. It is out of the question.

I think the Irish Government should look at the camps in Calais and Dunkirk. We have met many good people there – people who have a lot to add to society here. It would be such a gesture to go over there, process people, take them from these camps and bring them to Ireland to settle them. It would mean so much and it would be a beautiful thing to do.