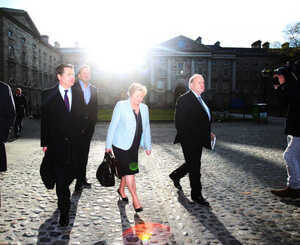 Do we really want to follow a Tory model of low-spend?

Don’t be surprised to see loss of competitiveness, poverty, inequality and poor public services dominate the headlines over the next few years.

We are potentially heading down a dangerous stretch of road ahead – leading us into the Ultra-Low spend zone.

In this zone, investment declines and, so competitiveness and productivity; health and education services suffer; income supports falter adding fuel to the inequality engine.

So how far behind are we falling? Let’s compare public spending (excluding interest – this is called ‘primary’ expenditure) in the EU-15 countries.

I’ll use the method devised by Seamus Coffey who hangs out at Economic-Incentives. He excluded elderly-related expenditure and then compared Ireland with the rest of Europe.

He did this because Ireland has an advantage here – we don’t have to spend as much on pensions and related expenditure because we have a smaller proportion of elderly.

In the following, old-age expenditure is subtracted from total primary spending. For instance, Ireland spent 37.2 percent of its adjusted GDP (adjusted per the Irish Fiscal Council’s hybrid-GDP estimate that factors in the accounting practices of multi-nationals).

It spent 4 percent on the elderly, leaving an expenditure level of 33.2 percent excluding elderly-related spending. Figures for European categories are mean averages. 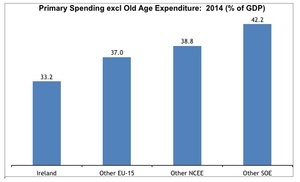 Ireland ranks below all the European averages. What difference would it have made in 2014 in actual Euros and cents?

To reach the average of other EU-15 countries, we would have had to increase public spending by €6.5 billion.

The next comparison is with other Northern and Central European economies (other NCEE). This is the EU-15 excluding the poorer Mediterranean countries like Greece and Portugal. To reach this average, we would have had to spend an additional €9.6 billion.

The final comparison is with Other Small Open Economies, a category used by the IMF. These are economies with a small domestic market and a high reliance on exports. Austria, Belgium, Denmark, Finland and Sweden are in this category. This is arguably our peer group.

To reach this average we would have had to spend an additional €15.5 billion.

[Note: some will say that defence spending should also be factored in as other European countries spend more than us. This is true. In the EU-15, defence spending makes up approximately 1.3 percent of GDP; it’s 0.4 percent in Ireland. In any event, defence spending is a policy choice and, in my opinion, shouldn’t be excluded from comparisons. But if you insist, knock off about €1.5 billion off the numbers above.]

In 2014, it could be argued that we are already a low-spend economy but as I wrote here, the situation could actually be worse. I have reservations about Seamus’s method. Excluding old age expenditure not only removes the demographic driven part of overall spending, it removes policy choices.

Most other EU-15 countries spend more on elderly per capita than we do. Second, if we are to adjust for the elderly population, then we should also adjust for youth demographics. In Ireland, under-20s make up 28 percent of the population, compared to 21 percent in the EU-15.

And we are a low-spender when it comes to education. EU-15 countries spent 5.3 percent on education, Ireland spent 4.7 percent. We have a third more children than the EU-15 and spend more than 10 percent less.

Therefore, when these are factored in, I fear we will have fallen even further behind. But let’s stick with Seamus’s method. Besides, those calculations above were then and we are heading into an even worse situation. Let’s fast-track to 2021.

Here, I use the IMF estimates. There are certain assumptions we will have to make. First, that the interest expenditure throughout the EU-15 – 1.5 percent – applies to each country (it won’t but it will average out). Second, that expenditure on old age remains constant. This will almost certainly change but in all likelihood, spending will increase in Ireland faster than in the rest of the EU-15.

The 2015 Ageing Report estimates that the number of pensioners over 65 years will increase by 17.5 percent in Ireland between 2013 and 2020 compared to a growth rate of 10.9 percent.

We will still have a demographic dividend but the higher growth rate will result in higher spending. And we will have more students in 2020 while the number of students in Europe will fall. So, if anything our demographic driven spending will rise faster.

Third, we assume that 75 percent of the fiscal space will devoted to public spending, or €8 billion. So what is one possible future, based on the IMF estimates? 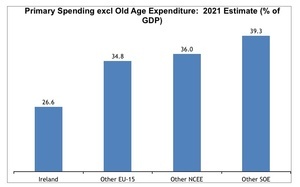 By 2021 spending in Ireland collapses, falling well behind other European averages.

To reach the average of other EU-15 countries in 2021 we will need to increase spending by €21.2 billion.

To reach the average of other Northern and Central European economies, we will need to spend €24.4 billion.

To reach the average of other small open economies, we will need to increase spending by an incredible €33 billion.

These should be treated as indicative as they are based on assumptions and estimates. Will other EU countries increase or cut spending? Will spending on old age rise faster or slower?

However, we do know from the Government’s own projections that primary spending will fall from 34.2 percent in 2014 to 24.7 percent of GDP between 2014 and 2021. Add in the spending from fiscal space (2.8 percent) and the fall is still substantial.

As I stated before – it’s not all about increasing spending. We need to spend more efficiently with greater accountability and transparency. But even if we were to be the most efficient spenders in the EU, we would still end up being one of the lowest.

So we have a choice.

The only other country that comes close to us is the Tory-led UK. Do we want to follow a Tory model of low-spend or a continental model?

If we want the former, don’t be surprised to see loss of competitiveness, poverty, inequality and poor public services dominate the headlines over the next few years.

But if we want the latter – a continental model – then we not only have to reject proposals for tax cuts, we need to begin a debate over which taxes we are going to raise.

And we better start that debate now, before we find ourselves stuck in the Ultra-Low Spend Zone.