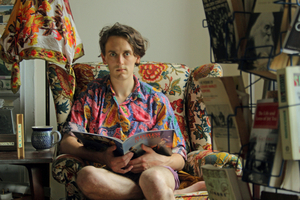 1. Emerging from Sligo, Myles Manley is a songwriter that is Ireland’s (definitely-not-self-proclaimed) “foremost highbrow, underground popstar”.

2. He’s grand for a tune, though – past the sarky sense of humour lies a penchant for pop goodness, as ably demonstrated in debut album Greatest Hits 2012-2013 and last year’s More Songs. It’s translated to UK, European and Russian touring, as well as love from BBC Radio 1 and the Irish music media.

3. Streaming above is the Arsenal-tastic vid for Pay Me What I’m Worth, described by Radio 1’s Phil Taggart as “an anthem for anyone who works below middle management”. ***NSFW bit at the end.***

4. He’s playing a free gig at the Triskel Arts Centre in Cork this Friday 13. He’s also at Broken Home in Galway on the 14th, and the Swagman in Sligo on the 15th.

Verdict: World-weary troubadour, or grinning smart-alec with an ear for pop? Worth the while to find out in a live environment.