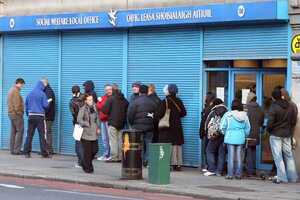 No one group has suffered more.

So why is no one talking about restoring the cuts to social protection?

Why isn’t this on the agenda? Why are so few talking about it (one exception is Unite the Union, there are other civil society groups in this conversation, too)?

We hear a lot about repairing the social damage, paying back those who made sacrifices during the recession. So why is no one talking about restoring the cuts to social protection?

If you’re looking for people who suffered during the recession you’ll find most of them reliant upon social protection payments. 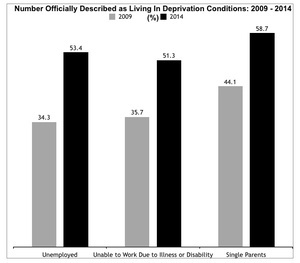 Over half of unemployed, single parents and those unable to work due to illness or disability suffer multiple deprivation experiences.

For single parents reliant on social protection payments, the figure is probably higher than 59 percent as this category would also include single parents in the workforce, many of whom would not suffer deprivation.

Yes, we must get the unemployed back into work but even by 2021, the Government expects unemployment to be 6 percent.

Yes, we must devise programmes to get many of those suffering from disability into the workforce as well but we have a long ways to go – Ireland has the lowest level of employment among this group (bar Bulgaria and Hungary).

And we need to help single parents back into the workforce (a national network of affordable childcare would help in this regard).

We must be doing all these things – but in the meantime, we shouldn’t be consigning a huge swathe of the population to poverty and deprivation.

How much would it take to reverse the costs? In January of this year, the Social Protection Minister puts some numbers on this. Based on this, it would cost close to €800 million to restore social protection payments to their nominal 2009 level (including restoring the cuts to youth Jobseekers’ Allowance).

It would cost approximately €1.2 billion to restore these payments in real terms (factoring in inflation).

If this seems like a lot, remember – this is only about restoring the 2009 status quo. It would still mean stagnation since then.

The new Government intends to spend €3.5 billion on tax cuts up to 2021. There is an additional €€2 billion tucked away under the fiscal space radar for ‘tax indexation’; that is, tax cuts.

So there is some money about if you think that trying to lift people some ways out of poverty and deprivation is important.

It’s not as if this money will go down some black hole. By and large it will be returned back to the economy through higher consumer spending which means more money in the tills and cash registers of businesses throughout the country (low-income groups have low propensities to save).

If this doesn’t sound too unfeeling, people on low-incomes are demand-conduits; what goes into one pocket, goes out of the other into businesses and their workforce. This is all the more the case given that low-income groups’ consumption is less import-dense – they spend less abroad, or on new cars, champagne or other imported items than the rest of the population.

But at the end of the day, you prioritise according to your political values (economics is not science, it’s politics).

If you believe that poverty and deprivation is a stigma on society, a social obscenity, and an avoidable outcome, you will prioritise those who are having trouble making ends meet.

This includes those reliant on social protection, those on waiting lists (housing, health), the homeless, the elderly living in isolation, those mired in arrears, the child in need of special education, the carer in need of help with their disabled relative.

The list is not endless but it is substantial. We can fashion our economic (political) and social priorities in a way that helps, assists, supports.

And if we do that, we will find that we are all better off.

We are not self-aggrandising units of consumption. We live in society, participating in a dense network of social relations. When some of those relations are mired in poverty and deprivation, it degrades all of us.

So let’s start – even if it is a small start – to build a better society. Let’s start restoring social protection payments.

81 thoughts on “Anyone For Social Protection Payment Restoration?”