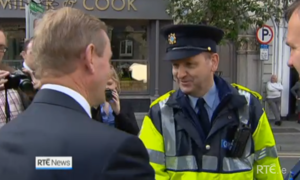 Garda whistleblower Sgt Maurice McCabe on duty in Mullingar, Co. Westmeath, when he met Enda Kenny while the Taoiseach was canvassing in the town ahead of the local and European elections in May 2014

You’ll recall how High Court Judge Kevin O’Higgins was appointed in 2015 to chair a Commission of Investigation into complaints of Garda malpractice in the Cavan-Monaghan area made by Sgt Maurice McCabe.

The Commission of Investigation was launched on the advice of Sean Guerin SC who initially looked into Sgt McCabe’s complaints.

The O’Higgins report has not been published but it was handed to the Minister for Justice Frances Fitzgerald on April 25.

Since then, there has been a drip feed of articles about the contents of the report.

Last night, after having secured a copy of the report, RTÉ journalist Philip Boucher Hayes said the following on RTÉ One’s Drivetime:

It’s a bit of a Late Late Show report – there’s something for everyone in it. It’s the kind of document that doesn’t make a clear determination one way or another so much as it criticises and it exonerates everybody in equal measure. If you were of the view that Maurice McCabe blaguarded his colleagues and exaggerated cases in order to pursue his own agenda, you’d find some substantiation for that in what Justice O’Higgins has to say.

McCabe was “prone to exaggeration at times”. Some of his complaints against his fellow gardaí were “over stated”. Some were described in the report as “unfounded”. And, as evidence of McCabe’s ingenuity, his detractors will point to the allegations which were “withdrawn”.

A picture emerges of McCabe on this reading, as somebody who cried wolf, who dragged the reputations of his colleagues and the entire force through the mud needlessly but that’s a selective reading of what Justice O’Higgins has to say.

He also says of the whistleblower sergeant that he is a person “who acted out of genuine legitimate concern”, that he “was never less than truthful in his evidence”.

The judge says he, “unreservedly accepts his bona fides” and that he had shown “courage and performed a genuine public service at considerable personal cost. For this he is due the gratitude of not only the general public but An Garda Síochána”.”

Those who were previously persuaded that Maurice McCabe wasn’t the victim of discrimination will find evidence in the support this belief. McCabe said he “had reason to believe that he was being set up and wrongly implicated” in some of the cases of which he had complained. Attempts were being made to point the finger of blame right back at McCabe where he had cried malpractice.”

The judge said that such a belief was “unproven” so McCabe wasn’t being persecuted for coming forward on this reading. Yes, except the report also says that there are five instances where there were attempts by the force to “blame Mr McCabe for malpractice or poor policing”. And, in each of these cases, the judge decided that “the sergeant was being wrongly blamed”.

So, simultaneously, Maurice McCabe wasn’t being persecuted for blowing the whistle but was being wrongly blamed by fellow gardaí for doing things that he didn’t do.

Frustrated that he was being ignored by Garda management, Maurice McCabe had found a device that would ensure his complaints which, the judge affirms, would get a hearing.

“The complaint was in part a device to make sure that it came before the minister. At that time a complaint against the Commissioner had to be referred to the minister.”

Again the judge offers something for all sides to say they had been unfairly maligned and simultaneously vindicated.

Anyone reading the accounts of the report that Maurice McCabe withdrew his allegations could reasonably infer that he knew he was on shaky ground in some of the things that he was saying.

Justice O’Higgins had to plot his way through a great deal of, he said, she said. But what was at the root of all of this was McCabe’s allegations of Garda incompetence or malpractice. Here, he finds repeatedly that the Gardai didn’t do their jobs properly.

He says, of Lorraine Brown, and her allegation of assault that she “under went a harrowing experience and was entitled to have the matter dealt with competently and professionally by the gardaí. Unfortunately, as is evident from the findings of the commission, her legitimate expectations in this regard were not met.”

Of Maurice McCabe’s claim that gardai were failing to prosecute motoring offences and impose penalty points, the judge finds that “there was a clear pattern of members of the public being stopped for having no insurance or some other deficit in their documentation. In a number of those offences, the member of the public recorded as having admitted the offence. However, the examined print outs reveal a failure to prosecute in many instances.”

And of the most tragic of all of the cases, highlighted by Maurice McCabe, the murder of Sylvia Roche Kelly, by Jerry McGrath, the judge concludes that McGrath shouldn’t have been out on bail and wouldn’t have been were it not for a failure on the part of gardaí in Cavan.

He says that there can be no excuse for “a misclassification of that assault and a failure to communicate effectively within AGS [An Garda Siochána] to ensure accurate and relevant information was shared.”

Any report this long is going to lend itself to being read from in a way that supports one narrative over another. Even more so in the case of this report which offers something for everyone to support their case.

But so too does it support many of the allegations of incompetence, poor practice, malpractice and failure to serve the public that were at the heart of what Maurice McCabe first alleged.

Previously: Lest We Forget

12 thoughts on “‘Something For Everyone’”