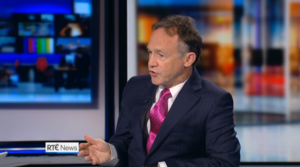 Mr Reynolds reported that the documents show Mr Smyth told the judge he was instructed, by the Commissioner, to challenge the ‘motivation and credibility’ of Sgt Maurice McCabe.

This, Mr Reynolds reported, was because Ms O’Sullivan had to consider the welfare of all of the gardai not just Sgt McCabe.

Paul Reynolds: “Well. OK. This controversy began last week when it was reported that the Garda Commissioner’s legal team was going to claim that Sgt Maurice McCabe was motivated by malice. This was in marked contrast to the Commissioner’s public statements in support of the Garda whistleblower.”

“Now we have seen documents today which show that, early in the Commission’s hearings, the Commissioner’s senior counsel said that, quote, his instructions from the Commissioner were to challenge the integrity of Sgt Maurice McCabe. Now the judge put that issue to one side, so if you can think of that as an earlier hearing.”

“Now the Commissioner’s senior counsel then told Mr Justice Kevin O’Higgins that, quote, my instructions at all times were to challenge the motivation and credibility of Sgt Maurice McCabe.”

“Senior counsel Colm Smyth also said that it was on an error on my part when he said, earlier, that his instructions had been to challenge the integrity of Sgt McCabe.

“So he said that he made a mistake at the earlier hearing when he said he was challenging his integrity. But he said they were going to challenge Sgt McCabe’s motivation and credibility.”

“So, the Garda Commissioner’s legal team was going to challenge his motivation and credibility in relation to this. Senior counsel for the Garda Commissioner told the judge that Sgt McCabe had, quote, alleged corruption on the grand scale against the five senior officers and that he had been invited to withdraw the allegations of corruption against Martin Callinan but he had refused to do so.”

“So the Garda Commissioner’s senior counsel also pointed out the reason why he was challenging the motivation and credibility of Sgt McCabe on these points, he said he was doing this on behalf of Nóirín O’Sullivan because she had to consider the welfare of all of the gardai not just Sgt McCabe. She had a concern for his welfare and his concerns, but she also had a concern for the other officers, the other officers against whom the allegations were made. They were also under her control and, quote, that she had to hold the balance.”

Wilson: “Ok, a lot of detail there, Paul, if we pick our way through it, I take it you’ve had sight of certain material. We know that other material that other reporters had sight of has made its way into the newspapers.”

“At this stage, without challenging the rights and wrongs of either sets of documents that you’ve all seen and what they say or don’t say, how is this going to be all cleared up, once and for all? Does it require the commission chairman to come out and make a clear statement?”

“Because we’re talking here, not about the evidence, if I’m correct, but about the case that’s being set out by the lawyers. A lawyer would come into a courtroom or before a commission and say, the case I’m going to make is this, they set out their stall.”

Reynolds: “Well, these documents are essentially clarification documents and they do tend to clarify it because if you look, just to go further, in relation to that allegation of malice – and that’s the one that’s been subsuming people and politicians over the last week – Colm Smyth, the senior counsel for the Garda Commissioner told the judge that the Commissioner never claimed that Sgt McCabe was motivated by malice and he said, ‘I never used the words mala fides’. He said, ‘those were the words that in the first instance came from Mr McDowell’, that’s Michael McDowell, senior counsel who was representing Maurice McCabe, his legal representative.”

“He also said that the word ‘malice’ was introduced, or the words mala fides were introduced by yourself, the judge, in interpreting what my instructions were. So he said that the Garda, that he never used the word malice or mala fides and neither did…he never used them on behalf of the Commissioner, the words were used by the judge and by Michael McDowell, who was representing Maurice McCabe.”

Wilson: “But then, sorry, Paul, just to be clear. Colm Smyth we’re talking about here, the senior counsel, what was he going in to clarify when he went back before the commission then?”

“And the senior counsel in the transcript of the earlier hearing replied, ‘so be it, that is the position judge’. However the issue had been left to one side so this later hearing clarifies that when the judge reads the transcript back to Colm Smyth and he says, the senior counsel on behalf of the Garda Commissioner, he clarifies this by saying, ‘I never used the words mala fides’ and after he clarifies it, the senior counsel for the Commission, Sean Gillane stands up and says, ‘let me clarify this’ and he says, quote, “no case was being made that Sgt McCabe either lacks integrity or acted mala fides in bringing his complaints”.” 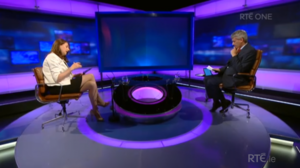 Meanwhile, also earlier tonight, journalist Katie Hannon revealed sections of transcripts from the O’Higgins Commission of Investigation in May and November, on RTÉ’s Prime Time.

The following are the sections reported by Ms Hannon:

Colm Smyth SC: “I have instructions from the Commissioner, Judge. This is an inquiry dealing with allegations of malpractice and corruption on a grand scale by members of An Garda Siochana.”

Judge Kevin O’Higgins: “No. This part of the inquiry…”

Smyth: “I appreciate that but my instructions are to challenge the integrity of Sgt McCabe and his motivation.”

Smyth: “His motivation and his credibility in mounting these allegations of corruption and malpractice.”

O’Higgins: “…An attack on somebody’s credibility and his motivation or integrity is something that really doesn’t form part of this inquiry. It would be necessary for you to go further and say that the complaints and the actions of Sgt McCabe were motivated by… that is motivation was dishonest or wrong.”

O’Higgins: “…In other words that he made these allegations not in good faith but because he was motivated by malice, by some such motive and that impinges on his integrity. If those are your instructions from the Commissioner, so be it.”

Smyth: “Yes. As the evidence will demonstrate judge…[later] this isn’t something I’m pulling out of the sky, judge, I mean I can only acting on instructions.

Smyth: “Right the way through.”

Smyth: “My instructions are reconfirmed.”

O’Higgins: “Very good. Your instructions as I understand them are that Sgt McCabe acted as he did for improper motives.”

O’Higgins: “Okay and that his integrity is being challenged in that respect.”

Smyth: “In that respect.”

Later in November, on the day Garda Commissioner Noirin O’Sullivan is due to give evidence – by which time Sgt McCabe had produced a transcript of his meeting in Mullingar with two gardaí

Smyth: “As far as the Commissioner was concerned at all stages I had instructions to challenge Sgt McCabe in relation to motivation and credibility.”

Smyth: “No. There was no mention of integrity.”

O’Higgins: “Well that is the clarification I sought. So the position now is that his motive is under attack, credibility is under attack from the Commissioner. But not his integrity.”

Smyth: “Just to be clear about it. The credibility in so far as he made these allegations of corruption and malpractice. There is no question about that.”

Smyth: “Judge, the Commissioner has a duty of care to all members. She wasn’t acquiescing. She has to hold the balance between, on the one part she has Sgt McCabe who she has a concern for and his welfare and on the other hand she has a concern for the Superintendents who are under her control. She has to hold the balance. She cannot come down on the side of Sgt McCabe and say I agree with everything he says without challenge.”