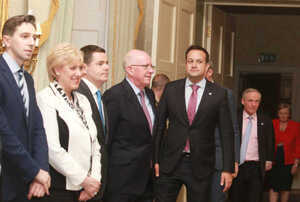 Leo Varadkar, at the unveiling of new ministers last month

Leo Varadkar, new Minister for Social Protection  went on RTÉ’s News at One with Aine Lawlor to discuss the new unemployment figures and his plans to get people, including the disabled, off welfare and into work.

Leo: “Particularly what we’ll be doing in the Department of Social Protection is we’ll be targeting the groups that haven’t managed to get back into work – you know, assisting people with disabilities, one-parent families, also long-term unemployed. So we have Jobs Plus already which is a grant to employers to particularly take somebody off the live register, we have the Wage Subsidy Scheme which assists people with disabilities and particularly now, with…”

Aine Lawlor:“You don’t have to list them off now, minister. But I suppose the question that arises there and a question that’s going to be debated and particularly watched carefully, coming from the Left, is whether these kinds of schemes are simply another version of what the Left would call Tory workfare.”

Leo Varadkar: “Yeah, I’m not sure what they mean by that. I suppose, in my view, you know, any form of work is of value and, if we can take people who are on welfare system, get work and training, there’s always value in that.
But the key thing which I think is of crucial importance is that there is progression and you did see in the past, you know, a lot of people going on schemes, particularly the not exclusively Community Employment schemes and going from those back on to welfare.
And what we want is people progressing from welfare to work and from part-time and low-paid jobs to full-time and better paid jobs and that requires a cross Government approach. But, you know, I don’t like the view that does come from some people on the Left that, you know, some jobs are not worth having. I don’t think that’s the right attitude and I don’t think most people in society would share that view.” 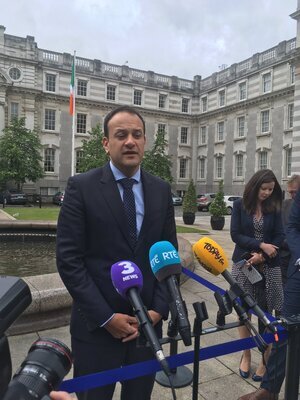 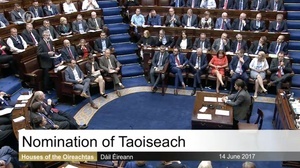