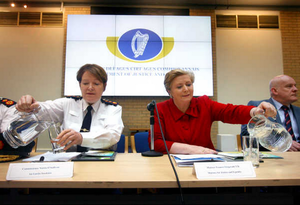 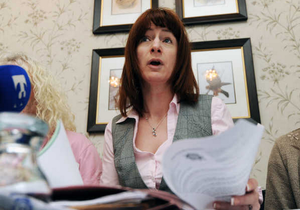 Independents 4 Change TD Clare Daly spoke to Audrey Carville on RTÉ’s News At One this lunchtime.

The interview came after Garda Commissioner Nóirín O’Sullivan released a statement at midday, saying, “I can confirm that An Garda Síochána’s legal team was not at any stage instructed to impugn the integrity of Sergeant Maurice McCabe or to make a case that he was acting maliciously.”

Audrey Carville: “Just to repeat, Nóirín O’Sullivan states, ‘I can confirm that An Garda Siochana’s legal team was not, at any stage, instructed to impugn the integrity of Sergeant Maurice McCabe or to make a case that he was acting maliciously. We’re joined now by Independent socialist TD Clare Daly. Clare Daly, thanks for joining us, do you believe the Commissioner when she says that?”

Clare Daly: “I think she’s saying very little. I think, if you read it carefully, her statement is very well put together. She’s selecting the word, ‘integrity’ which of course, we know from the leaked transcript, was exactly the expression used by her senior counsel Colm Smyth in November [2015] when he said the integrity bit was his words but she’s very silent on the allegations which were upheld that they were instructed to question the credibility and motivation of Maurice McCabe. And I think while she says and we can take it maybe, in some sense, they had to cross examine the evidence of everybody including Maurice McCabe, and I think everybody would accept that but this wasn’t about cross examining the evidence, this was about questioning his motivation, his credibility and having two senior officers prepared to give false testimony to back that up. And those allegations are still unanswered.”

Carville: “But isn’t she right though? In relation to the documents that have been leaked, she calls it the selected information purporting to relate to these proceedings out into the public domain, the transcripts of no more than three minutes of what happened at a Commission which ran for 34 10-hour days.”

Daly: “I think it’s interesting that she did choose to focus on that and says they’re selective but she doesn’t say they’re not true and they’re very comprehensive in their entirety of what they’re claiming and the claim hasn’t been denied anywhere – that Garda authorities instructed their legal team to basically go in and give false testimony to mislead the Commission as regards the credibility and motivation of Maurice McCabe…”

Carville: “How do you know that though? You can’t say that for certain.”

Daly: “I can say that for certain. And nobody disputed it any where, including the Garda Commissioner. To say that the evidence that was leaked is not valid or that it’s only part of the story – that’s not the case. It’s a very comprehensive transcript which stands up in its own ground and that added to other testimony that I’m absolutely aware of that the Garda legal team adopted an incredibly adversarial approach to Maurice McCabe where it was repeatedly stated at the Commission that he was, in effect, being put on trial – that treatment was not given to anybody else. I think it’s interesting that the Commissioner says she’s now asked the minister to investigate the matter of the two senior officers but the reality is is that this claim, with these two officers, was made over a year ago and it was only withdrawn last November – just before, on the eve if you like, of Noirin O’Sullivan herself giving evidence to the Commission. But if that information was out there, which it was, why hasn’t she, as the Garda Commissioner, already investigated that matter and why is she doing it now that it’s in the public domain because she’s aware of it.”

Carville: “Do you welcome though that it has gone to GSOC to investigate?”

Daly: “I think sadly GSOC are not equipped to deal with these matters adequately, it’s interesting that she talks again about dissent not being disloyalty for the current Garda whistleblowers whose cases are before GSOC. They haven’t been able to get a proper hearing and dissent is very much disloyalty under Noirin O’Sullivan’s watch as far as they’re concerned. So I don’t think GSOC are adequately equipped to deal with this. I’m glad somebody is investigating but to be honest with you, the real answers have to come from the Minister for Justice [Frances Fitzgerald] who, in legislation, ultimately is accountable for the behaviour of the Commissioner and I don’t think she’s accounted for her actions adequately. I think this is a longer statement basically saying what she did the last time and hiding behind confidentiality and legal points which have not been validated by any independent source again talking about Section 11 of the Commission of Investigation which is factually incorrect because that simply deals with evidence and the information here is not evidence, it’s a legal position being put forward.”

Carville: “But if there was a position, if there is an implicit admission in this statement that perhaps Sgt McCabe’s motivation and credibility were to be challenged, before the Commission, isn’t that fair enough because, as she says, the Gardai were being subjected to the most serious of allegations, from Maurice McCabe. So, in any court, isn’t the person making the allegations cross examined to the fullest?”

Daly: “I’d be fully in favour of evidence being cross examined and indeed motivation can be but that’s entirely different to senior garda officers, in order to substantiate that, being prepared to give false evidence to the Commission. And that big, giant elephant is still in the room because that is a fact that has been undisputed and we need answers on that because that evidence was apparent to the Commissioner as late as a year ago and nothing has been done on it. Now we’re being told she is going to do something on it, or asked the minister, that’s not good enough for the head of An Garda Siochana. We’re talking about, in essence, perjury to a sworn commission. It’s highly serious.”

Carville: “But we don’t know exactly what those two senior Garda were prepared to do because it hasn’t made it in to the final report. And it’s not really dealt with in any of the leaked documents either.”

Daly: “And it is very much out there in the public domain, that the Garda Commissioner’s statement hasn’t answered it, and we need very clear answers on it, I mean I’d like to know, for example, why is Noirin O’Sullivan only acting on it now?”

Carville: “But it’s only a suspicion, Clare Daly, about what the two senior officers did. And she is now referring it to GSOC to be investigated.”

Daly: “The people who were at the Commission are very clear on what the two officers said, very, very clear and there were quite a number of people at that Commission and I honestly believe the truth will out and I’m perfectly satisfied and safe, if you like, in saying that they were prepared to give evidence to mislead and only withdrew that when taped evidence was produced by Maurice McCabe to say what they had said was not true. That was the trigger that led to it being withdrawn. This man could have been ruined had be not had that tape recording.”

Carville: “Yeah, well, the matter is gone now to GSOC to investigate that and, as I say, it’s not fully clear from Mr O’Higgins’ commission that was indeed the case. Some people have said that it is time to draw a line under this. That nothing good can come from repeatedly going over this same situation in relation to Maurice McCabe, what do you say to that?”

Daly: “I think we can’t move forward until we honestly deal with what has happened. And I think we have repeatedly made the point that since the exit of Commissioner [Martin] Callinan and Minister [for Justice, Alan] Shatter, unfortunately, under the watch of Noirin O’Sullivan, and Frances Fitzgerald, the same very bad practice regarding the vilification of whistleblowers has continued and there’s nothing new in that and we know that from the treatment of Keith Harrison and Nick Keogh, current Garda whistleblowers, whose dissent has been very much treated as disloyalty. These people are out of work sick, they’ve been vilified, demonised, their life has been made an absolute hell – all on Noirin O’Sullivan’s watch…”

Carville: “Thank you very much indeed, Independent socialist TD Clare Daly. And just to reiterate that no allegations have been proven against two senior gardai, that they deliberately misled the O’Higgins commission.”