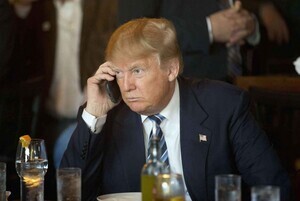 How could you have banned a US citizen born in NYC? @realDonaldTrump

Tragedy brings the worst out of Donald Trump and his supporters.

When faced with a massive tragedy the natural inclination of most democratic political leaders, from across the spectrum, is to put partisan politics aside for a time and stand together in solidarity and grief.

Campaigns are put on hiatus, genuine political differences are temporarily put aside while the country mourns and tries to cope with the enormity of what has befallen it.

It is what happened in the wake of recent terrorist attacks in France and in Belgium and countless times in the USA in the aftermath of yet another mass slaying of innocent victims.

Yet, last night, even before the names and details of the 50 men and women callously slaughtered in the Pulse Nightclub in Orlanda had been released, the Republican Party’s presumptive candidate for the US Presidency chose to take the other route, going was online to whip up anger and score political points off the worst instance of US domestic terrorism.

Within minutes of the news emerging, Trump took to Twitter to express his commiserations and grief saying: “Horrific incident in FL. Praying for all the victims & their families. When will this stop?”. He was expressing a sentiment shared by countless millions learning the news of the horrific homophobic attack.

But Trump could not leave it there. Within the hour he was back to acknowledge the messages he had received from his supporters. Now his focus was not on the yet unidentified Orlando victims and their families: he was shifting it back on him.

His tweet began: “Appreciate the congrats for being right on radical Islamic terrorism…”. One hour out of the spotlight was too much for him to handle. Donald the Ego was back. His descent deep into the quagmire continued, actually it worsened, shortly after President Obama went on TV to express the grief and outrage of the American people.

Where President Obama sought to be measured calm and reassuring, Trump was reaching for the dog whistle both on twitter and in an intemperate statement calling for Obama’s resignation.

On Twitter he said: “What has happened in Orlando is just the beginning. Our leadership is weak and ineffective. I called it and asked for the ban…”

I responded to him on Twitter pointing out that a ban on Muslim immigrants would not have stopped the Orlando attack as the reported perpetrator was a US citizen, born in New York city.

Within minutes Trump’s online supporters were attacking me from all sides. Apart from their collective abhorrence of the prospect of more gun control, their arguments and rebuttals flatly contradicted each other.

Some said that I was missing the point and that an immigration ban would have stopped the killer’s parents from immigrating (though they were somewhat sketchy on how a ban imposed in 2017 could be backdated to prevent them entering 30+ years ago).

Others, the more hard-line ones, said that Trump would not just introduce a temporary ban on Islamic immigrants, but that he was in favour of banning Muslims – full stop.

Some of these talked about how they could set up internment camps like (according to one deluded soul) those set up in WW2 or perhaps, even, deport them.

Another smaller set of Trump supporters, identifying themselves as immigrants for Trump, harangued me saying that it was me who was implying that all Islamic immigrants were terrorists and that Mr Trump had never said that.

It was hard not to be struck by the glaring inconsistencies and absolute contradictions between these most steadfast and passionate of Trump advocates and to reflect on how it is not the detail of what Trump says, but its vagueness and hollowness that attracts them.

He presents them with a blank platform upon which they can unload their own prejudices, grievances and bigotry without reference to what their fellow Trump supporters say or think.

While ugliness and confusion of these yelped Twitter responses can possibly be explained by the anger, ignorance and frustration of those involved, no such excuse can be applied to the man who lets loose this anger by, in the guise of leadership, blowing the dog whistle on this tragedy.

Trump took the opposite course last night. In comments that might have been viewed, in days gone by, as treasonous and unpatriotic, Trump went well beyond usual partisan politics and dismissed America’s leadership as weak and ineffectual. He as good as said that the terrorists are winning.

How can you ever hope to make “America great again” by publicly talking it down in the wake of an attack?

Prof Simon Schama’s Tweet in the midst of the anger and turmoil last night summed it up best: “…we have a cultural civil war now in USA”.