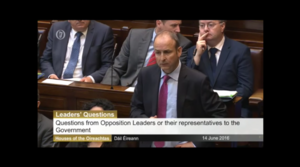 It followed Sinn Féin leader Gerry Adams calling for a Commission of Investigation into the sale twice in the past two weeks.

Mr Martin said there are rumours that further arrests are on the way in relation to the sale – following the arrest in May of two men in Co. Down on suspicion of fraud offences, by the British National Crime Agency.

They’ve since been released on bail.

In response, Taoiseach Enda Kenny maintained that the sale was “was executed in a proper manner” – echoing his previous responses to Mr Adams.

Micheál Martin: “The UK’s National Crime Agency is investigating this. There have been two arrests and there are rumours of more arrests on the way. It is being investigated in the United States. The Northern Ireland finance committee has had an inquiry. At the very least, NAMA should have attended that inquiry. It is the biggest sale since the agency was established and there are huge concerns about it. Yet we, in the Republic, seem to have adopted an attitude that there is nothing to see here, that everything is fine on this side of the equation.”

“I put it to the Taoiseach that at the time that PIMCO revealed that people were seeking fees, surely that was the time for the entire deal to be called off, for both NAMA and the Minister for Finance, who was alerted to it, to call a halt to that deal and say there were too many questions about it. It was something from which they should have pulled back. The Irish taxpayer lost out to an extraordinary degree but worst than that, the deal is tainted, of that there can be no question.”

An Ceann Comhairle Seán Ó Fearghaíl: “Has the Deputy a question?”

Martin: “All of this could have been avoided if the Government had not decided to sell such large blocks of assets under NAMA and to force the pace in terms of accelerating the disposal of assets at steeper discounts than were necessary.”

Enda Kenny: “On Deputy Martin’s point in respect of NAMA and Project Eagle, I want him to understand that, as I have said here on many occasions, I am informed that this loan sell was executed in a proper manner. Despite all the comments and allegations, there are no claims of wrongdoing against NAMA. That loan portfolio was sold following an open process to the highest bidder for what it was worth. NAMA paid no moneys to any party on this loan sale against whom allegations of wrongdoing are now being made. Anyone with evidence of wrongdoing needs to report it immediately to the proper authorities, as I am sure Deputy Martin will do if he has information in that regard.”

“The Government and NAMA take very seriously, and why should they not, any accusations of NAMA employees or former employees breaching the NAMA Act.”

Martin: “A consistent thread in the Taoiseach’s replies to various people on this question during the last Dáil and this one is that there has been no wrongdoing on NAMA’s behalf.

Kenny: I said “No allegations of wrongdoing against NAMA”.

Martin: “The allegations are about the deal. That is the point but the Taoiseach keeps almost deliberately ignoring it. The allegations are about the entirety of the deal, its ethics and its rightness or wrongness. Surely, when people heard that there was up to €7 million in an offshore account, it raised eyebrows. Surely, the deal should have been called off when PIMCO alerted NAMA to elements of what was going on and when the Minister for Finance, Deputy Noonan, was himself alerted to what was going on at that stage. There is no point in saying that everything on our side was fine and we have covered our backs, that all our paperwork is clear and clean in the Republic and in NAMA headquarters and the fact that others may have got up to all kinds of activity is of no concern to us.

Ó Fearghaíl: “I thank the Deputy.”

Martin: “That is what has come back to us in regard to this. It is the sense that has come from Ministers, the Taoiseach and NAMA in a very defensive mode. Instead of saying that if something is rotten in the state of Denmark in regard to this deal, it is in our interests to tackle and deal with it.

Martin: “Did it ever occur to the Taoiseach that we should have set up a commission of investigation when the National Crime Agency, the US Securities and Exchange Commission and others were pursuing this? The Taoiseach mentioned the Northern Assembly. There seems to be a sense of a connection and a nexus between politics and all of this in the North as well. That may emerge in the coming weeks.

Ó Fearghaíl: “Deputy, the time has elapsed. Thank you.”

Martin: “I put to the Taoiseach the question of whether he ever asked the Minister of Finance, Deputy Michael Noonan, the question as to why the shutters were not pulled down on this deal when PIMCO gave its information to NAMA in regard to third parties.”

Kenny: “If Deputy Martin makes the case, the Government is in no way defensive about this issue. If there is something rotten, as the Deputy says, in the state of Denmark relative to this case, what he is saying is that the process by which this sale was completed was wrong, was not up to standard and was not in accordance with proper procedure. I am informed that the sale was conducted under proper conditions, that it was sold following an open process to the highest bidder for what it was worth.”

Kenny: “Is that right or is it not right? That is what I am informed. If I am being misinformed here, if somebody has got evidence to that effect, I would certainly like to hear it. The Deputy makes the point that the sale should have been stopped. Where is the evidence that the process that was followed was not open—–”

Adams: “There are seven million reasons.”

Martin: “The offshore account and the money paid in fixers’ fees.”

Ó Fearghaíl: “The Taoiseach to conclude.”

Kenny: “In the sale being concluded, the information that I am given, standing here in the position that I hold, is that this was conducted in a proper and open process, and was sold to the highest bidder for what it was worth….”

Time for politicians to put up or shut up-SF, FF, Soc Dems & some Indies want NAMA Inquiry. They have the numbers… https://t.co/EcbpYhPCRb

FF again calling for NAMA Commission of Investigation at Leader Questions.Have word with SF,Soc Dems + Indies;you’ll have Inquiry this week.

Previously: ‘Nama Has Done Nothing Wrong’

‘Nobody Had Presented Me With Evidence Of Wrongdoing By Nama’ 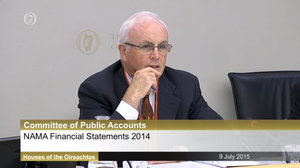 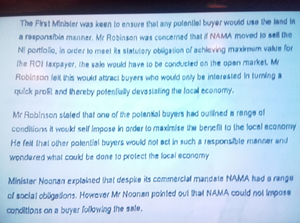 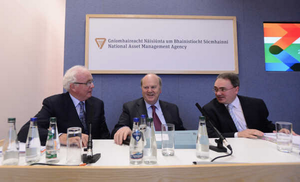 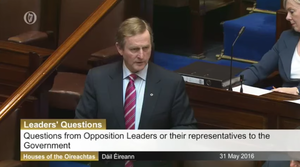 11 thoughts on “‘Something Rotten In The State Of Denmark’”