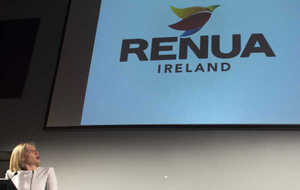 From top: Lucinda Creighton at the launch of Renua; Dan Boyle

The increase in support for the populist left in Ireland has been achieved by seeking to promote policies that are recognised in other countries as being right wing.

I was asked recently why I thought a populist right wing party hasn’t taken hold in Ireland? Where is our Donald Trump or UKIP or even our Front National?

These questions came on foot of a declaration by Renua Ireland that it had electorally failed because it was seen to be a right wing party.

For much of our history Irish politics has been an ideology free zone. Our main parties have been catch all parties bringing conservative and social democratic elements into their tents. Our ‘centre’ has been more to the right than other European countries.

We now have a centre that’s a bit more left, but not hugely so.

We have developed a populist left. In this we can include Sinn Féin and the PABAPA twins. Political volatility has allowed both groupings to affect empathy with the disadvantaged in our society, without having to seek the responsibility of having to do anything about such inequality.

The increase in support for the populist left in Ireland has also been achieved by such parties articulating, and seeking to promote, policies that are recognised in other countries as being right wing.

In what other country would opposition to capital taxation be seen as left wing? What erstwhile socialist elsewhere would curry favour by suggesting inheritance tax wasn’t socially progressive?

Most wealth is held in capital. Taxing such capital for any progressive has to be a mainstay of any system seeking to bring about greater equality and fairness.

I think the biggest diluting factor in preventing a populist right wing party in Ireland has been the ability of independents to get elected, and currently to do so in large numbers. In terms of international politics this is a uniquely Irish phenomenon.

Independents can say and be anything they want to be. Their’s is the greatest freedom to pander any number of public prejudices.

The outrageous statements that are the stock in trade of our more successful independent politicians, can be a safety valve in venting uncomfortable thoughts existing in society, thoughts that no responsible political party could ever articulate.

Independents have organisations that rarely develop beyond their local strongholds. This has made the prospect of national organisation holding extremely right wing views less likely.

Another factor has been our willingness to subsume elements of right wing government into our own. The Irish Constitution reads in part as a love letter to Portuguese corporatism of the 1930s.

Whenever the idea of an extreme right wing party has been toyed with here it has usually met with derision.

In the 1930s The Blueshirts, as the Army Comrades Association, never even got to contest elections being blended into the new Fine Gael party. Its leader Eoin O’Duffy was shuffled off in a matter of months.

In the 1940s we had Ailtirí na hAiséirghe (Architects of the Revolution). While the party sold thousands of copies of its pamphlets it never came close to winning a Dáil seat. It did win some local council seats with Cork being a particular stronghold, sadly.

These days some followers can be found in the darker recesses of the Internet. The Celtic Cross masquerades as an Irish swastika.

Their thoughts are vile yet somehow we know that by laughing at them they’re never likely to take hold here. 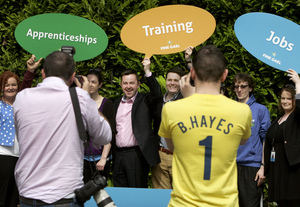 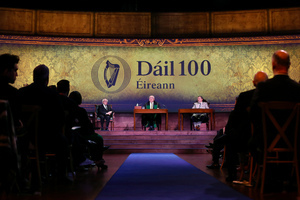 49 thoughts on “All Right Now”