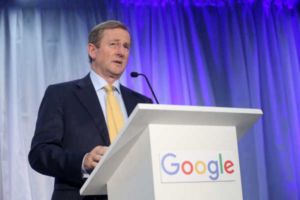 Near the top of the agenda [in Brussels] for investors continues to be the European Commission’s probe into Apple Inc.’s tax arrangements in Ireland, with both the company and the Irish authorities bracing for a decision that the Irish provided the iPhone maker with illegal state aid through a sweetheart deal.

In the first clues to a firm timeline for a decision on a probe which opened in 2014, Irish Finance Minister Michael Noonan told Bloomberg on Thursday in Luxembourg that the commission may publish a decision sometime in July, though “we don’t know that with certainty.”

…There’s a range of estimates out there. In a worst-case scenario, Apple may face a $19 billion bill if the government ultimately loses and is forced to recoup tax from the company, according to JPMorgan Chase & Co. analyst Rod Hall. Matt Larson of Bloomberg Intelligence puts the figure at more than $8 billion.

…Who gets the cash? Notionally, Ireland, even though the government says it doesn’t want it.

Why doesn’t Ireland want the cash, which after all could be equivalent to about all of the nation’s corporate tax last year? There’s a bigger picture, here, according to briefing notes provided to the incoming finance minister last month; a negative decision would hurt the country’s reputation and create uncertainty around it’s tax offering, which has been a key factor in drawing companies like Alphabet Inc.’s Google and Facebook Inc. to Dublin.