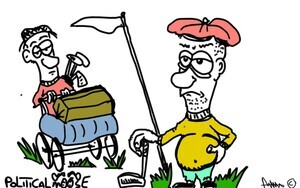 The author traces the iniquities of a system that fails everyone.

The Lads getting paid paternity leave. Like the Girls; Two hundred and thurty yoyos a week, just like the Girls.

Not for the 26 weeks mind, so they might have sum’ting to say about that. But I suppose when they can breast feed on demand after they have their whole’s ripped open they’ll be getting all the weeks they want; maybe even post-natal Pensions. I’m all for it, look after the Daddies. Happy Daddies makes life much easier for new Mammies.

But here I am wondering if the Lads will be getting their employers to top up their Social Welfare €230.00 per week?

Like the Girls, if they‘re Guards, Teachers, Public Sector etc, Semi- State etc and Bank employees before a certain date etc, Big Charity NGO etc; they too, like the Girls will automatically get Employer top ups to full or near full pay for the duration of their Paternity Hols.

The closest number I can get back-up for is 18%. That is 18% of the current work force is in this employer bracket.

But if the Lads are in Industry, Private Sector SME IBEC country, it’s anyone’s guess. IBEC say that most small businesses don’t pay the Girls top up. IBEC also say that 59% “Usually” top up. (My whole is it 59% by the way) but if they say so. I wonder will it be the same for the Lads and their Paternity leave?

Yep, here I am again, giving out about the them-n-us in our Maternity Hospitals & Labour Wards.

So let’s go back to the numbers. Of all the Girls that have babies on the day you read this, 18% will certainly be getting their full pay.

To demonstrate my view on Maternity Leave Inequality I’m going to use the current average industrial wage for the first quarter of 2016 as the measuring jug; the CSO currently quote that figure as €707.99.

That’s right – what Social Welfare stump up is over twelve grand less than the Average Industrial Wage.

How do you feel about PRSI now?

They did in my day because there had to be a 4 week run in ahead of the due date, now its 2 weeks so I’d say it’s not as widespread as it was back when I was doing out the MB10.

But the unfairness hasn’t changed. My experience is my own, fair enough, because every Girl has a different story to tell. But I still hear stories of Girls needing one more week at work to pay off the Mothercare/ Mama’s n’ Papa’s order.

This is inequality because it’s unfair. And it’s our fault for letting it off.

I’d love to know the real number of the Girls that go back to work in debt. Girls with loaded credit cards, scaldy over-drafts, loans from the Credit Union, Provident, Baby Daddies and other Family members (who’d be the first to whinge about it btw.) Anyone?

I seriously doubt the Paternity Daddies will be going back to work that much out’ve pocket that they have to go the Provie man.

Here’s my thing, either put everyone on full pay or nobody, and then you’ll see the Public Sector get it back up to full pay for everyone. Or at least (where it is applicable and makes sense) let the value of the Maternity (and Daddies too) Benefit reflect the total PRSI Contributions for say the previous two years. Mind you with Leo in the gig, ‘M’uck knows who’s going to get looked after.

it’s just me, but there is something very heart-breaking about the Girl with a cranky colicky teethy five month old that’s down to her last fiver before she gets back to work and still needs to find sum’ting that fits, the Girl that can’t join the other new Mammies for coffee and cake, the Girl that has to hear “tis your turn to pay the rent”, the Girl that loses her place in the Baby Room because she doesn’t have the month in advance for the Crèche, the Girl that has to hand over her first few weeks/ months wages to someone else. Maybe it’s just me.

FYI, for anyone who’s arsed: . Also note, I’m not unaware of the carry-on Girls, and now Lads, who are self-employed have to get through just for that €230.00 per week.
It may look like I’ve ignored ye, but I promise it is not intended to be a slight or to be blasé in another example of the F U Jack, I’m one of ye now, and it’s the bed we’ve (well most’ve us) made ourselves.
The unfairness of our taxes and levies versus our Welfare benefits is a far different and wider battle; and one for anudder Friday. Or better again, maybe tis one for Taft and his charts. I also didn’t include Child Benefit in the above as its Statutory and therefore right across the board…

62 thoughts on “From Here To Paternity”