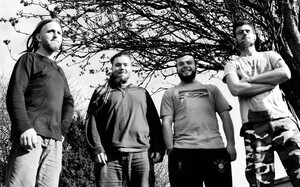 01. Sludgy, progressive metal emerges from the Premier County in the form of beardy four-piece zhOra.

02. Formed in 2011, the band quickly set about getting on metal bills around the country, currying favourable comparison with the likes of Mastodon in reviews. 2012’s EP Feet Nailed to the Ground was a glimpse at some promising heft.

03. Streaming above in its entirety is the band’s last release, 2013’s Almaz. Mastered by the standard-bearer of stupidly heavy tones, James Plotkin (Khanate, OLD). 2014’s live set at the Siege of Limerick was also committed to ones and zeroes, and is available for free download here.

04. The boys recently won the annual W:O:A Metal Battle, pipping several other Irish metal outfits to a slot at the world’s biggest metal festival, Wacken Open Air. As a warm-up, the lads are taking to Cork’s UrbanJungle on July 9th, headlining the debut edition of Welcome to the Jungle, a new monthly metal night.

Verdict:  A well-deserved step onto a bigger stage for the Tipperary heftmongers. Here’s hoping it leads to further new material in due course.