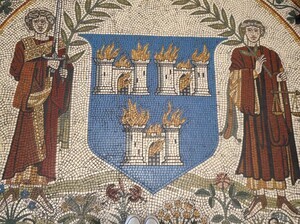 From top: Dublin crest on the floor of City Hall, Dublin; Derek Mooney

In his column last week the author suggested re-constituting the Forum on Europe on an all island basis. Now it’s nearly government policy. He’s that good.

This week: the hazards of a directly elected Dublin Mayor.

What is it about bad political ideas? When it comes to tenacity and resilience they put the cockroach to shame. While the cockroach simply trundles along looking loathsome and malodorous, bad ideas manage to get worse over time and yet somehow develop an enticing perfume.

So it is with the idea that Dublin should have a directly elected Mayor. Once again this superficially alluring proposal is being promulgated by some, including – though not exclusively – the Green Party.

It is as if its proponents had looked across the Irish sea, seen the absolute mayhem that the first two elected Mayors of London: Ken Livingstone and Boris Johnson, have wrought on the political scene so far this year and thought: hmm, how could we get some of that here.

It is not as if this is a new idea either. It has been trotted out in a couple of incarnations over the past decade and a half.

The first to run it up the flagpole was the former Fianna Fáil Minister, Noel Dempsey who provided for it in his 2001 Local Government Act. No one saluted, so it was wound back down.

It was then resuscitated by John Gormley in 2008, by way of a Green (discussion) paper and a subsequent draft piece of legislation, but it never made it into law.

Perhaps on the basis of three times is a charm, Big Phil Hogan wheeled out the proposal for a directly elected mayor again via his June 2012 local government reform document: Putting People First.

He envisaged the people of Dublin getting to vote on the idea in 2014 – but only if the members of the four Dublin Councils agreed. Three Councils did: Dublin City, Dun Laoghaire/Rathdown and South County, but the fourth: Fingal didn’t and so no plebiscite was held.

While the broad policy objective of giving more power to Dublin and having decisions about Dublin being made by people who are answerable to Dubliners is laudable, it appears to me that the directly elected mayor model is one with the least hope of delivering on that goal.

Any directly elected Mayor of the Dublin region would, after the President, have the biggest electoral mandate in the State, except that it would, unlike the President’s, be explicitly political.

Even on a turnout of only 50%, a directly elected Mayor for the Dublin Region (equal to the Dublin European constituency) would need to get over 200,000 votes.

That is some electoral mandate for one elected official to have and could potentially position them in opposition to the Taoiseach of the day, particularly where the Mayoral election was mid-way through a Dáil term.

Indeed it is hard not to imagine that Mayoral elections would be hi-jacked by opposition politicians as a platform to attack the Government of the day.

It is like having a referendum in Dublin on the policies of the government after two years, mid way through their implementation, but without the means to amend or change them?

Political gridlock in the Capital would almost be inevitable with a directly elected Mayor of Dublin, claiming to speak for about one third of the country, questioning and challenging the policies of the elected government.

Not that this capacity for political gridlock is limited to situations where the Mayor and Taoiseach were from opposite sides.

Look at the tension there was between Boris Johnson as Mayor and David Cameron as Prime Minister or between Ken Livingstone and Tony Blair/Gordon Brown as each operated what were effectively rival courts across the Thames.

Indeed the likelihood of political gridlock would be all the greater if the Dublin Mayor has no real responsibilities or powers to occupy themselves.

Most of the directly elected models that have been suggested thus far have envisaged the Mayors having co-ordinating roles, such as chairing the Transportation Authority. That is not going to keep them so busy that they won’t have time to make mischief for the government of the day.

The other question is what is to be done with the current tranche of 171 City and County Councillors across the four separate Dublin Councils?

You would hardly need all those directly elected Councillors sitting on four separate councils when you have a directly elected Mayor as that would be unnecessary duplication and waste, so how many do you cull? 80%? That would leave 34/35 to populate a regional Assembly.

Say you only cut 65% of them – leaving you with a regional consultative assembly of about 60 Councillors – that still means reducing the level of direct democracy and direct linkages between the citizens of Dublin and their elected representatives.

But isn’t part of the aim of having a directly elected Mayor to have greater linkages and answerability.

The case for greater joined up thinking and more decisions about being made by those answerable to Dublin is clear, but the directly elected mayor/super mensch is not the way to achieve that.

We need a model of city government that is based on the transfer of actual authority and finance raising power not just one individual’s ego and ambition.

16 thoughts on “The Dublin Mayor Nightmare”