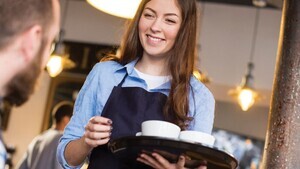 From top: Waiting staff have seen no increase in wages; Michael Taft

Employese are thumbing their nose at the state’s collective bargaining machinery, amassing profits while depressing wages.

The Low Pay Commission (LPC) will soon be making its recommendation for the National Minimum Wage.

Last year, they recommended a 50 cents increase in the hourly wage – nine years after the last time it was increased (in early 2011 the minimum wage was cut by €1 but this only lasted a few weeks as the new government quickly reversed it).

What will the LPC recommend this year?

We’ll know soon enough. But hopefully they will take note of what is happening in low-paid sectors.

Because in the hospitality sector, for example, profits are going through the roof. 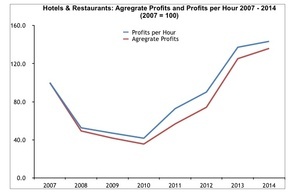 The hospitality sector, comprising accommodation and restaurants / food services, took a big hit in 2008, continuing to slide until 2010. However, since then profits have risen considerably. By 2014:

Since the sector hit its trough in 2010, profits have increased by more than three-fold. What accounts for this?

First, the Government rolled out a stimulus programme (at least in one sector they heeded what progressives had been advocating for years): a reduction in VAT and a cut in the low-rate employers’ PRSI (the latter has been reversed).

The National Accounts data only goes up to 2014. The CSO produces a Services Index which tracks real (i.e. after inflation) gross value added. This brings us up to 2016 1st quarter. Gross value added is equal to ‘sales minus costs’. Profits and wages are paid out of Gross Value Added.

What has been happening in the sector?

Between 2014 and the first quarter of this year, restaurants and food services has seen an increase of 19.2 percent in real gross value added.

In the same short period accommodation increased by 22.3 percent.

This is a strong indication that profits are continuing to grow at a brisk pace.

There have been a lot of good things happening in the hospitality sector – except for wages.

CSO data only goes back to the first quarter of 2008 but it shows that wages and weekly income have stagnated despite the recovery in profits and enterprise activity.

In that same period average weekly earnings have fallen from €334 to €321, as weekly working hours have fallen.

Profits are over 40 percent above their pre-crash levels; wages have fallen. That tells a tale. 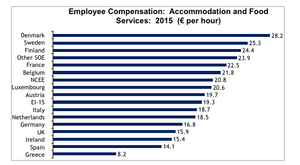 Eurostat data differs from the above CSO number in that they include employers’ PRSI and other labour costs, using a different methodology (though the Irish data would have been supplied by the CSO).

We find that employee compensation (or labour costs) in the Irish hospitality sector rank 12th out of the 14 EU countries.

Irish hospitality wages are 20 percent below the average of the EU-15 countries (Portugal not reporting).

They are 26 percent below one of our peer groups – Northern and Central European economies (which excludes the poorer Mediterranean countries).

And they are 36 percent below other small open economies (Austria, Belgium, Denmark, Finland and Sweden).

Compared to their fellow workers in other European countries, Irish workers in the hospitality sector are ultra-low paid.

And what are the employers’ response to all this? The Restaurant Association of Ireland has not only called for a freeze on minimum wage increases for five years; they are boycotting the Joint Labour Committee which was re-established by the last government in order to allow collective bargaining across the entire sector.

In a similar vein, the Irish Hotel Federation is also boycotting the Joint Labour Committee.

In effect, the employers’ are thumbing their nose at the state’s collective bargaining machinery, amassing profits while depressing wages. How’s that for responsible social actors?

Hopefully, the Low Pay Commission will take note of all this and respond accordingly. The chefs, floor staff, cleaners, clerical staff, bartenders – these are the men and women that make our hospitality sector work. The least, the very least they should get is a living wage.

44 thoughts on “Failing To Serve The Low Paid”