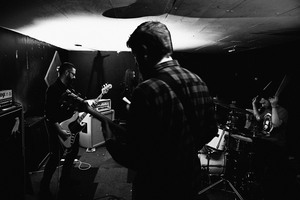 01. Galway sludge/doom metallers Harvester are back from an extended period of (dis)quiet with their second EP.

02. First EP The Blind Summit Recordings kind of flew under a lot of radars when released in late 2012, but is a solid slab of Sabbathesque rock ‘n’ roll, the release of which led to support for Uncle Acid and the Deadbeats a year later in Dublin.

03. Streaming above in its entirety is Harmonic Ruptures. Recorded by James Eager at The Hive Studios in Kilcoole, it was mastered by go-to heft technician James Plotkin.

04. The band are doing the rounds to back the EP’s digital release, playing the Roisin Dubh tomorrow night with Okus and Ten Ton Slug, again with Okus in The Hut in Phibsborough on Friday night and in Cleere’s in Kilkenny with The Kilo 1977 on Saturday. They’ll also be at the next Siege of Limerick in October.