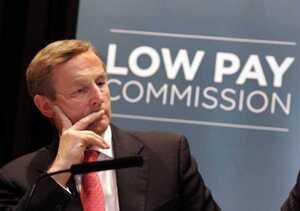 The relationship between wages and competitiveness is not a crude reductionist equation.

We pay a real cost for our low wage levels.

We should, of course, be sceptical about such sweeping narratives. We live in a complicated, complex world where exceptions and caveats invariably rule.

So let’s test this claim and see if it holds – at least in Ireland; at least on the issue of wages.

There are many ways to measure wages (Dr. Tom Healy of the Nevin Economic Research Institute looks at it this way). I will use employee compensation as a percentage of Gross National Income (GNI).

Gross National Income: this is essentially GNP. This is not an optimal benchmark as it excludes a significant amount of wealth that is generated in the economy.

So how do Irish workers fare?

Up to the crash, when wages were rising, Ireland was still below the main European comparators – the EU-15, Northern and Central European economies (NCEE – this excludes the poorer Mediterranean countries), and other small open economies – (Other SOE, countries with a similar open, export-dependent structure: Austria, Belgium, Denmark, Finland and Sweden).

When the crash hit, the graph shows Irish wages spiking but one has to be careful. Between 2007 and 2009 wages rose – as a proportion of GNI (from 46 to 52 percent of GNI); yet, during this period total wages actually fell by 6 percent. In fact total wages fell a further 8 percent up to 2012.

The reason for the spike is not rising wages but falling national income.

But as we came out of the recession, wages didn’t recover their pre-crash levels. Between 2000 and 2007, Irish wage levels averaged 44.2 percent of GNI. In 2017, the EU estimates this will have fallen to 39.6 percent. 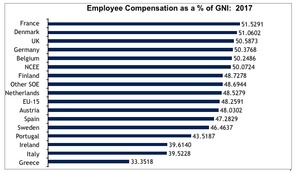 And it’s not like Ireland is a ‘poor’ country.

When we measure GNI per capita we find that Irish levels are 10 percent higher than the EU-15, marginally ahead of Northern and Central European economies and at that same level as other small open economies.

Unite the Union recently published its The Truth About Irish Wages. Using EU labour cost data it found that Irish wages are well below the European benchmarks.

But the real story is how low Irish wages in low-paid sectors are. Irish compensation levels in these sectors are well below the average of other European countries – well below.

The Irish low-paid are ultra-low paid.

Some might argue that we need low wages so that our exports are/become/remain competitive. However, other small open economies have much higher wage levels than we do and it doesn’t seem to affect their export levels.

Further, in our main export sectors – chemicals/pharmaceuticals and the information & communication sector – our wages are at average European levels. These sectors haven’t been affected negatively.

The relationship between wages and competitiveness is not a crude reductionist equation.We pay a real cost for our low wage levels.

First, is the low level of tax revenues. Taxes on labour are higher than taxes on capital. Therefore, when the latter is privileged, tax revenues are not optimised.

Second, our business sector suffers from low levels of consumer income. This not only affects businesses that primarily sell into the domestic markets; it makes it difficult for domestic businesses to transition to export markets.

Third, it affects workers’ living standards and especially those in sectors that are reliant on discretionary spend; less revenue coming into sectors like restaurants means less money that goes on pay.

So, yes, those lefties and their sweeping narrative appear to be on to something. Now we have to start debating how we write another narrative.

Growing wages to the European level – including both direct and social wages – is one of our main challenges. We need a strategy to make a fundamental shift from an economy reliant on low wages and low-paid sectors.

This goes beyond just increasing wages. It is about creating high-road employment and businesses that are focused on investment, R&D, re-skilling and innovation, rather than sweating labour.

The big question is: do we have the capitalists to do that? Myths Of The Squeezed Middle 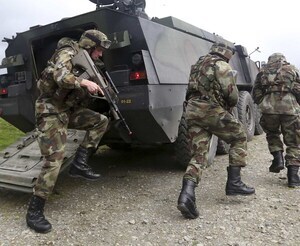 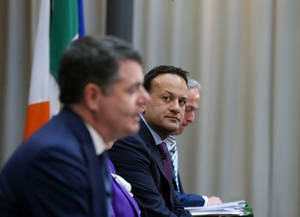 28 thoughts on “The High Cost Of Low Wages”