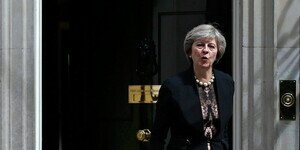 I was disappointed to see The Irish Times describe Theresa May as a “vicar’s daughter” in the headline “Tough and diligent vicar’s daughter with moral bent”. I have often seen Margaret Thatcher described as a “grocer’s daughter”. It seems female political leaders are always someone’s daughter. Never, however, have I seen David Cameron described as a “stockbroker’s son” or Tony Blair as a “barrister’s son”.

125 thoughts on “Sons And Daughters”