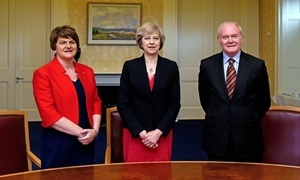 The political dynamic in Northern ireland is set to change and leaders North and South need to be prepared.

The new British Prime Minister Theresa May is in Northern Ireland today to meet with the First and Deputy First Ministers to discuss the potential impact of Brexit on the North and its implications on this island North and South.

Standing on the steps of Stormont Castle Theresa May repeated what she said on her first day as Prime Minister, reminding those present that she would govern “for the whole of the United Kingdom – of which Northern Ireland is a valued part”.

Fortunately, no one was so unchivalrous as suggest that it may not be quite “as valued” as other parts and point out that today’s Belfast trip comes over a week after Mrs May had already travelled to Edinburgh to meet the Scottish First Minister, Nicola Sturgeon and to Cardiff to meet the Welsh First Minister, Carwyn Jones.

These have not gotten off to a great start with the UK Minister responsible for the Brexit negotiations David Davis MP telling on Sky News’ Murnaghan programme that “one of our really challenging issues… will be the internal border we have with southern Ireland”.

Davis then went on to add that… “we are not going to go about creating other internal borders inside the United Kingdom”.

The internal border? Could it be that he just misspoke due to some lisp-like speech impediment that makes “ational” sound like “al”, ergo “international” comes out sounding like “internal”?

If only that were the case.

Sadly, this is not the only example of Davis failing to grasp the significance or complexity of the issues thrown up by the UK vote to leave the EU.

Indeed, when you look back over Davis’s statement and comments during the referendum it is hard not to conclude that his difficulties were not with EU membership as much as they were with globalisation, but back to the matter in hand.

Not only will Brexit dominate discussions between the British and Irish governments, it will also dominate political discussions in the North, though not necessarily at Stormont as that may not suit the DUP or Sinn Féin.

I am not suggesting that all these 90,000 were in favour of remaining in the EU, clearly they weren’t – but – I have heard anecdotal reports from experienced tally people of significantly higher voter turnouts in middle of the road nationalist/republican areas than seen in the last few elections.

One possible reason for this increase, apart from dissatisfaction with the political choices on offer to them, is that many of these returning middle-class, broadly nationalist voters had been reasonably content with the status quo up to the referendum.

They saw the UK and Ireland’s common membership of the EU as driving forces behind the gradual normalisation of their daily lives. They were seeing peace, stability and progress being delivered and the border slowly disappearing, so they felt no need to become politicised.

Now, they see their vote to remain in the EU and continue that progress being frustrated and blatantly ignored by a Government at Westminster that does not share their outlook.

“There are quite a number of nationalists who over recent years have been relaxed about their aspiration for a united Ireland and have seen it as an aspiration, rather than something they want to act to make a reality, and they are very angry.”

As the Brexit process continues and as its negative implications for this island – North and South – emerge we can expect to see that anger turn into something more constructive and the re-politicisation of this middle ground cohort within the North grow.

Couple this shift with the higher Remain vote among younger voters and you can see that the political dynamic in the North is set to change and political leaders North and South need to be prepared.

As part of that process of preparation we need to have an all-island Forum on Europe up and running before the end of the year.

Invitations to attend and take part should be extended to all, but participation should be voluntary and no-one should have a veto.

The Taoiseach and the government fumbled the Forum idea once, they need to regroup, steady their nerves and get it right.

11 thoughts on “Games Without Frontiers”