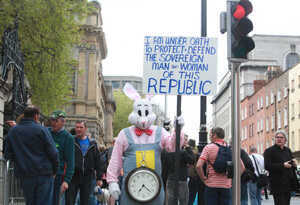 Being unburdened by history and being uncaring about the future are just some of the benefits  of living in the ‘Us’ world.

For the past ten years of my life I have been one of Them. I didn’t apply for membership and I don’t particularly want to be a member. It has been determined that this is who I am and this is where I should be.

It is only membership of the Irish branch of the global Them organisation, nevertheless, the sins of the many throughout the World are visited on we few.

Unlike the far more cool group, the Us organisation, we in Them are responsible for all that is bad or has gone wrong. Our foibles are all equivalent, equal to the worst transgressions that have ever been committed.

I long to be part of the Us group. Those whose accusations have greater weight when based on prejudice without needing to be in any way evidentially based. Facts about Them become facts through repetition.

The flaws of an Us member get to be judged differently. These are more sins of omission than commission. Context is all in the Us world. For their selfs at least.

Language is looser. Us people get to harangue Them losers at great length and with deep intensity. No epithet is out of bounds.

Consistency in word, thought or deed is not encouraged in the Us world. To be or become consistent is something of a heresy.

Logic is a pathetic shield that we in Them hide behind. The freedom to change what we say and what we believe is only the prerogative of those who belong with Us.

Being unburdened by history and being uncaring about the future are other hidden benefits of living in the Us world. In their world the counter factual explains everything.

A thesis doesn’t need to be challenged. If it exists it is believed. It becomes endorsed by others among Us who accept the truth it becomes.

As we in Them are responsible for all that is wrong, all that is required for Us to put things right, is to be the polar opposite of those who have brought wrong about.

The leaders of Us tell Us what they want to hear. Among Them there are those experts. Of whom there are too many. Of whose thoughts too much weight has been given. To whom too much attention has been made that has led Us down too many dark alleys.

For Us people there are no complex situations. There are no issues that cannot be resolved without the devising of an appropriate slogan. Solutions, like facts, become solved through the repetition of these mantras. It’s quite Zen like.

There is the option of being neither part of Us or Them. It is the saner option. The only downside is that the Us and Them groups share a mutual antipathy towards the Other. For both groups Other Wise is an oxymoron.

Maybe there is an Other way. A different way. A better way. For those who dream it is to be hoped that it may soon become Thus.