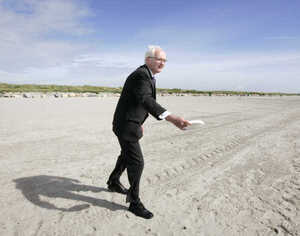 Politics and Journalism rarely find the relationship that is needed to bring about the best standards of accountability.

August. That awkward month when the media shows its painfully incestuous relationship with political activity of any type to provide it with copy. Left instead with the option of cold turkey, media sources create stories to fill the void.

For the most part silly season stories are harmless with readers/listeners/viewers in on the deceit that such stories are more contrived than usual. Unless you are part of such stories they tend to be quite entertaining.

When you become the story, in the absence of more substantive narratives, it becomes more difficult to escape the perception that gets created.

By way of example I give you the White Van crisis of 2010. Within the Department of the Environment it was decided by civil servants that the motor tax renewal form should be redesigned.

Part of the redesign was to re-emphasise the section on the taxing of commercial vans, vehicles subject to a lower level of tax. The reason for the lower tax has been to restrict the use of these vehicles from carrying passengers.

The emphasis on the new tax form was seized on by a news story claiming this as a Green Party initiative. This created an hysteria where the bringing of children to school or helping an elderly parent to collect their pension was being stopped by the meany greenies.

It was a classic case of facts getting in the end way of a good story. There was never any Green Party policy on the issue. John Gormley as the Minister concerned, gave no direction that a form should be changed at his behest.

Usual journalistic custom would be to seek corroborating quotes from those concerned. The beauty of silly season is that in looking for quotes from people who are on holiday who usually can’t respond. And so the stories get run anyway.

Silly season becomes a year long activity in the tabloid world. On occasion we see a crossover from journalists seeking to enter political life, a life they had usually sought to portray pretty cynically.

Good recent examples of this would be Michael Gove and Boris Johnson in the Brexit referendum. Journalistic skills help in defining subjects that can pique the public’s interest.

Hang upon this interest a known substantial prejudice, then repeat, and you will find a certain formula for success in politics.

Politics and Journalism rarely find the relationship that is needed to bring about the best standards of accountability.

Too many journalists become embedded with the political world that some want to be a part of. At the other extreme the more cynical of journalists have determined that politicians are a sub-species all of whom are inclined towards corruption.

The best of journalists avoid being spoon fed. They learn to differentiate between those who dissemble and those who wish to be honest. The best of politicians know the more they can be open and honest the less they are likely to be misrepresented.

Sadly we are nowhere near that place yet