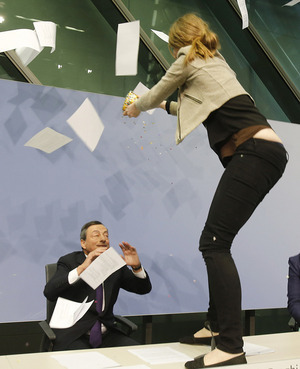 We have come terrifyingly close to global depression and are drawing nearer to a 21st century form of fascism.

But just as we avoided one we can escape the other

Three cheers for the system. Hip hip…. No? Nothing…?

This comes as no surprise. After the tumult and turmoil of the past few years it would require a hopefulness that bordered on the foolhardy to expect to hear anything even vaguely complimentary said about the system.

At so many levels, it failed us. The institutional accountability and oversight that we thought would prevent bank and financial crashes proved inadequate at best, and downright mendacious at worst.

It is a failure that reaches beyond the crash and extends right up to the present day with so many people seeing the present recovery as something that is happening in communities and areas other than theirs.

This feeling that is not unique to Ireland. We see echoes of it in the Brexit result in the UK with the high numbers of people in the former industrial heartlands of the midlands and the north of England voting to leave the EU.

We see it too in the support for Trump among blue collar workers in the “rust belt” states of the U.S. and in the support for Marine Le Pen’s Front National last December, particularly in the formerly industrialised areas of the North of France.

These were the parts most badly hit, not just by the crash, but by the advent of technology and globalisation before it. They have seen factories closed and jobs moved overseas. Not only that but it has all happened so fast, without time to adjust.

So, the lesson is straight forward: those most badly hit by the changing world and global financial crash are understandably those most likely to have lost most faith in the political and economic system.

So far, so logical. But there is a school of thought that suggests that the system – by which I mean economic and political systems – has not failed us as much as we might think.

Step forward political scientist and expert in international relations Prof Daniel Drezner. In his book: “The System Worked: How the World Stopped Another Great Depression” Drezner maintains that the Global system worked, albeit inelegantly.

He says that the efforts of central bankers and other policymakers within the G-20 IMF, WTO and other global institutions prevented the international crash becoming a full-fledged depression, like the 1930s Great Depression.

Indeed, he argues that while the global economy remains fragile (his book was written in 2014), that these global institutions survived the “stress test” of the crisis, and may have even become more resilient and valuable in the process.

This is not much comfort when you have lost your job and are struggling to find another. Knowing that the global system stopped the crisis toppling into a depression doesn’t make it easier to accept a big reduction in a living standard that was not all that high to start with.

Nonetheless, Drezner has a point. He reminds us how close we all came to falling into the abyss of another great global depression.

His comparisons with the 1930s crash, and how we narrowly avoided it, are important as that economic and social collapse contributed to the collapse of trust and confidence in the systems of government then and the consequent rise of fascism in Europe.

So, just as we came close to another great depression, have we – or are we – coming perilously close to a similar political drift?

Many commentators see it in the global rise of populism. They see that Brexit vote in the UK, Putin’s reign in Russia, Le Pen’s progress in France and, most significantly, the rise of Donald Trump as evidence that populism is on the march, and a goose stepping march, at that.

They see it in the demagoguery, the inflated rhetoric and – above all – the rejection of facts, evidence and expertise shown by Trump, Putin, Le Pen et al.

Doubtless, as we have come terrifyingly close to global depression, we may indeed be coming close to the return of some 21st century form of fascism, but just as we avoided one, I suspect we are also about to narrowly avoid the other, but only if the centre ground of politics holds and is not complacent.

While Marine Le Pen will almost certainly make it through the first round of voting in the French Presidential election next year, she is likely to be well beaten in the second round, a head to head contest between the top two candidates, especially if she is pitted against Alain Juppé.

As for the US, as the Trump gaffes and buffoonery of the past few weeks have shown, Donald Trump is less Benito A. Mussolini and more Rufus T. Firefly. (Firefly was Groucho Marx’s fictional leader of Freedonia in the 1933 movie Duck Soup).

This is not to say that Trump is a joke – far from it. But just as he is no joke, neither is he the Devil incarnate.

Comparisons between Trump and Hitler are not just over the top, they miss the important point that his rise represents: a deep dissatisfaction and disillusionment among a large swathe of blue collar voters with the prevailing system.

This is something I explored here in early June: Trump is riding a zeitgeist that he didn’t create, but that others have missed.

In France, in the U.S., indeed just about everywhere, the political centre ground is being tested and it must come up with solutions that are not just a return to business as usual.

As Michéal Martin observed in his John Hume Lecture at the recent MacGill Summer School:

“…for us to rebuild levels of political trust and engagement with the public, the path of a more reflective, expert and centre-ground politics is the only credible way forward”.

Maybe then, as EM Foster remarked in the introduction to his 1950 collection of political essays: Two Cheers for Democracy,

“We may still contrive to raise three cheers for democracy, although at present she only deserves two.”

26 thoughts on “Three Cheers For The System”