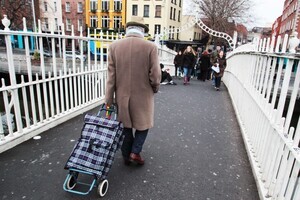 From top: Pensioner on the Ha’penny Bridge, Dublin; Michael Taft

The pension debate is overly complex and full of scare mongering.

Get ready for the big upcoming pension debate. Hopefully it won’t be conducted like the ‘we-are-taxed-too-much’ debate or the ‘Irish-wages-are-too-high’-debate.

Hopefully the pension debate will be evidence-based, without unsubstantiated assertions or slogans masquerading as policy. Let’s keep hope alive by looking at a couple of issues arising out of the report from the Interdepartmental Group on Fuller Working Lives.

For many, pensions are as exciting as a snail race. But believe me, when you get to a certain age it becomes seriously interesting. And with the rising number of elderly, it will become even more prominent in the debate.

The Interdepartmental report focused on the specific dilemma facing people forced to retire at the age of 65 but not being eligible for a pension until they turn 66 (by 2028 the eligibility age will be increased to 68). But the report touches upon wider issues. Let’s look at two of them.

We Can’t Afford Them

We’re going to get a lot of ‘we-can’t-afford-them’ – that is, future pension costs will be fiscally unsustainable due to the rising number of pensioners: .

‘Expenditure on State Pension payments and relevant supplementary payments is estimated to rise from just over €6.5bn in 2015 to around €8.7bn in 2026, assuming no further changes in rates – an increase of 34%.’

While they don’t scare-monger these numbers, others will. But should we be overly-worried about this number?

As a proportion of national output (GDP or GNP) these numbers indicate that pensions will actually cost less in the future; at least up to 2026. 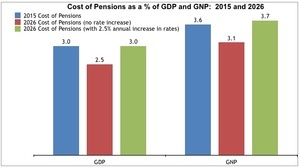 Using the report’s own numbers, pensions as measured as a proportion of national output will fall between 2015 and 2026 – whether measured by GDP or GNP. In my own calculations,

inserting a 2.5 percent annual increase in weekly pension payments, the cost remains the same. This doesn’t factor in the increased revenue – higher income and indirect tax revenue which will offset a small part of the cost.

This is not to under-estimate the challenges of funding people’s post-retirement income; after 2026 the cost will continue to rise. But it is important to keep these rising costs in perspective.

There’s Going to Be More of Them

More pensioners, that is. Which brings us to another issue – the age-dependency ratio. It has been pointed out that there will be fewer people at work supporting more people retired – a real social, economic and fiscal challenge. 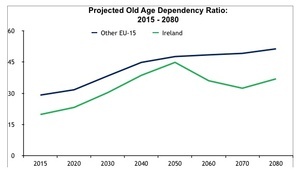 Ireland’s dependency ratio, while staying below the mean average of other EU-15 countries, will nonetheless double over the period to 2050 – to 45 percent. After that the ratio falls to the level that exists in other EU-15 average today – and then rises again.

A couple of things to note about this type of projections. First, it is highly sensitive to small changes in variables such as immigration levels, longevity, fertility, etc.

To show how fragile these projections can be, just remember Ireland in 1989. High emigration, low immigration; who would have imagined that within 10 years everything would be turned upside down. If it’s hard to project demographics over a decade, try attempting it over multiple decades.

Second, age and pension-dependency ratios are also a product of policy. For instance, even under same variables, the above chart is out-of-date. The age range is 65. But Irish policy is to increase the pension age to 68 by 2028. This will improve the dependency ratio under current projections.

Or how about this: the Government pledged to take in 4,000 Syrian refugees yet only 350 have arrived. If we were to have a more pro-active immigration policy, we could improve the dependency ratio.

Why do you think Germany committed to taking so many in? Under current projections, their dependency ratio will rise to a staggering 60 percent, with the population in decline (many EU countries are facing into falling populations).

That’s why what’s called the European ‘immigration crisis’ is actually a ‘social and economic opportunity’.

Again, this doesn’t under-estimate the challenge but hopefully it will point us to positive proposals, rather than an alarmist debate.

The purpose of the inter-governmental report was to address the issue of raising the pension age while people were still required to retire at 65 years. The report calls for a number of interventions, mostly aspirational.

Why not just forbid forced retirement at the age of 65. Retirement should at least become mandatory only when someone is eligible for a state pension.

Or why not go further and just outlaw age-ism. People should be given a range of work-choices – continuing to work past the pension age, reduce working hours, or retire at the pension age. If someone is not considered fit to continue working in a company, it should be treated as a health and safety issue, not an issue of an arbitrary age.

There is no denying the complexity of the issues regarding ageing, pensions, life-time savings and the diminishing number of defined-benefit occupational schemes. We will need an informed debate based on evidence with proposals that are intended to enhance peoples’ life-options and living standards.

One might be pessimistic that this will happen when one considers the how debates over tax, spending cuts, competitiveness, etc. have been, and continue to be, conducted.

But one should live in hope – hopefully for a long, healthy and prosperous life-time.

14 thoughts on “Preparing For The Upcoming Pension Debate”