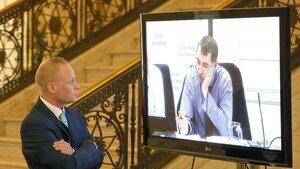 The recent Stormont resignations are an indication of the level of strict and unfaltering discipline that still operates within Sinn Féin.

If there is one thing the Provos do well, it is commemorations. Give them the slightest reason and out come the banners, wreathes, black polo-necks, replica uniforms and the gang is ready to march anywhere.

So zealous are they to remember and memorialise that the objects of their commemoration do not even require any direct connection. All that is needed is a rallying cry, a route map, a bit of media attention and they are all set to go.

It is therefore curious, given this penchant for marking the contribution and sacrifice of others, that neither former Sinn Féin M.L.A. Daithí McKay nor Sinn Féin activist Thomas O’Hara can expect to find their colleagues publicly commemorating them anytime soon.

Last week, McKay resigned his Stormont seat and O’Hara was suspended as a Sinn Féin member after the Irish News accused McKay, then chair of Stormont’s Finance committee, of arranging for O’Hara to coach a witness due to appear at McKay’s committee in September 2015.

The witness, loyalist blogger Jamie Bryson, was there to give evidence about allegations of political corruption linked to Nama’s £1.3 billion “Project Eagle” sale of Northern Ireland property.

At the Committee hearing Bryson made allegations of kickbacks to a senior politician and, at the conclusion of his evidence, accused then Northern Ireland Peter Robinson of being that politician.

This is in line with the advice Bryson received from O’Hara on Sept 19th in their Twitter direct message exchanges:

O’Hara: When talking about Robinson refer to him as ‘Person A’. So say all you have to say about him referring to him as Person A. Then in your final line say: Person A is Peter Robinson MLA. Means that the committee cannot interrupt you and means that you don’t have to say robbos name until the very last second. So then it’s job done!

Shortly after the Bryson evidence, McKay was at the Dáil’s Public Accounts Committee on October 1 to discuss his committee’s investigations into the Project Eagle deal.

Responding to a specific question from Deputy Shane Ross on Bryson’s evidence and why the NI Finance Committee had decided to call him, McKay replied:

“It is well known that he [Bryson] has blogged at some length on this. It is also well known that he appears to have a lot of material which some believe may have been fed to him from another source. It was an issue of debate for the committee. What the committee agreed to do was to set a bar. The bar that has been set for him and future witnesses is that they have to prove that they have some connection to the terms of reference of the inquiry.”

Oh the irony of McKay talking about Bryson being “fed” and his setting the bar high.

So, why does any of this matter?

Well, there is more to this episode than just dodgy goings on by Sinn Féin at Stormont. Nama’s Project Eagle was the single biggest property sale in Irish history.

The investigation by Stormont’s Finance Committee was supposed to establish the truth behind the accusations of wrong doing.

Perhaps that Stormont Committee was never going to be able to uncover the truth behind the deal and expose whose fingers were in the till, but as the SDLP Leader, Colum Eastwood, has pointed out:

“Sinn Féin’s interference in that democratic investigation has only served the purposes of those who are alleged to have corruptly benefited from the Project Eagle deal in the first place”.

It is hard to imagine that was Sinn Féin’s primary intention, yet it is the likely outcome of it.

So why, after months of posturing and calling for a full public investigation of this massive property deal, would Sinn Féin undermine an element of that investigation?

Were they just eager to get Robinson’s name on the record or could they have had other pressing political considerations at the time?

At around this this time last year senior PSNI officers were linking a murder in east Belfast with the Provisional IRA. That killing was thought to have been in revenge for a killing in May.

We are now expected to believe that undermining of what is a very legitimate public concern was all done by two lone wolves: McKay and O’Hara without any input, sanction or direction from others? Really?

The current N.I. Finance Minister, Sinn Féin’s Máirtín Ó Muilleoir has described the contacts between Bryson and the Sinn Féin officials as “inappropriate”.

He denies any involvement with or knowledge of their communications, though he was a member of the McKay committee when Bryson gave his evidence and was even mentioned twice in the O’Hara/Bryson exchanges.

If the positions were reversed down here and it was a Fine Gael or Fianna Fáil Minister facing such questions, it is hard to imagine Messrs McDonald, Doherty or Ó Broin being quiet as phlegmatic and dismissive as Ó Muilleoir appears in his statement this morning.

The fact that both McKay and O’Hara have so readily been thrown under the bus without even a whimper from either is not only a testament to their loyalty and commitment but an indication of the level of strict and unfaltering discipline that still operates within Sinn Féin.

Can you imagine a T.D., Senator or Councillor in any other party being so ready to walk away so silently?

While it is tempting to speculate that Michéal, Enda or Brendan might yearn to have such command and mastery over their flocks, I suspect they are content to forego such control as they see the bigger picture and know that democratic accountability is not well served by such martial docility.