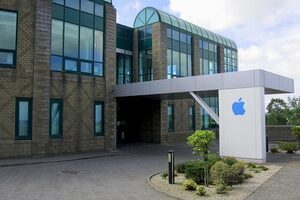 Tony Connolly, of RTÉ, reported on the Today with Seán O’Rourke Show:

“We can establish that the amount of money that Ireland and Apple, or the amount of tax, rather, that the [EU] Commission believes Apple should have paid amounts to the sum of €13billion over a ten-year period.”

“That is a staggering figure – €13billion – that the Commission believes that Apple should have paid to Ireland and they said the fact that they didn’t, that this amounts to illegal state aid. Another line that I can tell you is that the Commission believes that between that, in that period, Apple paid an effective tax rate of 1%, then falling to an effective tax rate of 0.005% in 2013.”

“…So that’s what the Commission are saying. They’re going to give more details in that news conference [at 11am] in the next 15 minutes…”

Previously: Far From The Tree 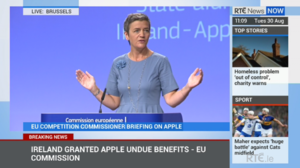 “The Irish branch was subject to normal Irish corporation tax. However, the head office was subject to no tax in Ireland or elsewhere. This was possible under Irish law which, until 2013, allowed for so-called stateless companies.”

“As a result of the allocation method, in the tax rulings, only a fraction of the profits from the Apple Sales International were attributed to the Irish branch. The remainder, the vast majority of profits was attributed to the so-called head office.”

“This means that Apple Sales International, as a whole, paid very little tax on its profits.”

“Let me illustrate for one tax year: In 2011, Apple Sales International made a profit of €16billion – less than €50million were allocated to the Irish branch, the rest, the huge majority, was allocated to the so-called head office where they remained untaxed.”