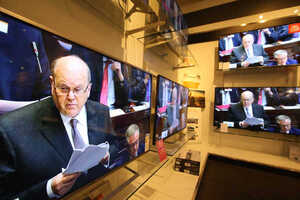 I mentioned previously that the run-up to the budget is my favourite time. We get all manner of sloganeering and mantras. Take this one: a pro-business budget. This usually refers to more tax reliefs, more grant handouts and income tax-cuts to lessen upward wage demands.

Throw in scrapping the odd regulation (always referred to as ‘red tape’) and voila: a pro-business budget.

. Yes, these are the demands of business organisations but as Sean Lemass pointed out:

‘Nobody nowadays regards the operation of an important industrial undertaking as being the exclusive private concern of its owners . . . The social consequences of fluctuations in the level of business activity are matters of public debate.’

In short, business in Ireland is too important to be left exclusively to Irish business. It is a social activity involving a range of stakeholders. So what would a real pro-business budget look like, one that takes into account social consequences?

In the first instance, it would recognise three principles:

The fortunes of business are inextricably intertwined with the fortunes of society. A prosperous, confident, creative society is likely to create a business sector in its image. If you don’t think so, imagine the opposite: high-levels of poverty, educational inequality, crumbling infrastructure, impoverished public services, etc. What kind of business sector will that produce?

Second, business is not homogenous. Export-focussed firms are not that interested in domestic demand – but they are keenly interested in the demand in other countries. Businesses focussed on the domestic sector, on the other hand, would have an interest in domestic income levels.

Thus grounded in these principles, here are some ideas for a pro-business budget.

1. Reduce income Inequality: concentration of income at the top of the income pyramid is bad for business. Higher income groups have a higher propensity to save and their spending is more import-dense. If the goal is to induce higher consumer spending, especially if Brexit unsettles confidence, then redistribute to lower income groups.

This would mean no tax cuts for high-income groups (they’re getting pay rises anyway – the CSO shows managers and professionals have seen incomes rise by 7 percent in the last four years compared to losses in other groups). Instead, redirect resources towards raising social protection rates – which spend almost all their income.

2. Increase Investment: essentially, investment ‘buys assets’ that either generate future income or reduce future costs. Investment into advanced broadband can generate new business opportunities; investment in water and waste reduces costs associated with leaks and maintenance; investment into renewables and green energy reduces import and environmental costs. All these come with not only higher business activity (it takes people and materials to produce these assets), but crowds-in additional private investment.

3. Increase Government funded R&D: Ireland is a bottom-dweller in the EU-15 when it comes to support research and design. We would have to increase R&D – in telecommunications, energy, environment, health, transport, etc. – by over 40 percent to reach the average of our peer group, other Northern and Central European economies.

4. Education, Education, Education: this is a key driver, not only in enterprise ability but in reducing inequality. I charted Ireland’s performance on education expenditure here. We would have to increase spending by €1.2 billion to reach other peer group average in Europe.

5. Reduce Living Costs: what is one of the biggest drains on the productive economy (besides debt)? Requiring people to pay market prices for public goods. For instance, health is a public good – yet so many have to purchase it on the private market.

Reducing the costs of childcare, the costs of rents (through public or voluntary cost-rental models), the cost of public transport by having a proper subvention regime – these would reduce unnecessary upward pressure on wages and free up money to spend . . . in the private market. Businesses get a win-win on this.

6. Expand Public Enterprise: business is business – whether it’s public, private, non-profit, capital-owned or labour-owned. So bring together all the public companies and work out a strategy to expand: new start-ups, joint ventures with private companies, expansion, and procurement strategies to facilitate the SME sector.

7. Face Reality: Apple is only the beginning. The momentum in Europe is towards EU-wide initiatives to tackle multi-national avoidance through transparent country-by-country reporting laws, greater transparency in transfer-price fixing, the common corporate consolidated tax base and an EU-wide withdrawal tax. We can either

(a) Hide our head in the sands and hope the world doesn’t notice us,

(b) Line up with the most right-wing forces in Europe (and the richest, tax-avoiding multinationals) to block these initiatives, or

(c) Face up to reality and begin devising a post-Apple foreign direct investment policy. An evidence-based debate is necessary in order to achieve a new consensus. And to achieve that consensus will require the input of all the stakeholders – employees, employers, civil society groups, etc. The Government should announce that it will start this process the day after the budget.

There’s a lot more things we could start doing in Budget 2017 and most of this could not be achieved in one year. But a pro-business budget is one that looks to the long-term, eschewing short-term gesture measures; one that comes with a realisable road-map.

Being ever the optimist, I can’t wait for October 11.

18 thoughts on “A Pro- Business Budget”