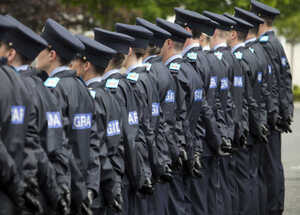 From top: passing out parade at Templemore, Garda College in August; Derek Mooney

The guards are fundamentally wrong to threaten industrial action but their deep frustration and absolute exasperation is understandable.

If the Luas and Dublin Bus pay disputes are anything to go by then the choreography of future pay rows, particularly public sector ones, is likely to run as follows:

Step 1. Both sides negotiate for months without success.

Step 2. Employees go on a limited strike, inconveniencing the public

Step 3. The strike action continues for 3 – 4 weeks while both sides posture on TV and radio news shows

Step 4. Both sides then ‘suddenly’ return, without preconditions, to the negotiating table

Step 5. Employers find extra cash for pay increases they previously said was not there

Would it not be better for everyone, most particularly the public who these public services are meant to… well… serve…, if the unions and management could just skip steps 2 and 3 and jump straight to step 4?

Or, could it be that steps 2 & 3 are an essential part of the process and are needed to bring everyone to their senses or, at least, to a better frame of mind?

Has our industrial relations process developed (or, should I say ‘descended’?) to a point where, on one side, the workers need a couple of days on the picket line to let off steam and, on the other side, management need to suffer a few days of lost business, in order to create a more conducive negotiating atmosphere?

If this is the case, and it increasingly appears that it is, then we will have a bit of a winter of discontent ahead as other public sector groups get themselves geared up to dust off the picket signs and placards.

The situation is not helped by the news that the body established by the last FG/Lab government to oversee industrial relations mediation and the improvement of workplace relations and hailed at the time – by both Fine Gael and Labour Ministers – as marking a new era for employment rights and industrial relations: The Workplace Relations Commission (WRC) is just not working.

According to a recent survey conducted for the Employment Law Association of Ireland, half of the legal and industrial relations practitioners surveyed are dissatisfied with the new Workplace Relations Commission and think that the new WRC system is even worse than the much-criticised version it replaced only one year ago.

The survey’s key findings here and the Irish Examiner op-ed by the association’s chair, Colleen Cleary, both make for grim reading, though the association does identify the main problems and helpfully proposes a series of changes and reforms to make the new system work efficiently and effectively.

One group who will not likely benefit from these changes, if they are made, is An Garda Síochána as they fall outside the State’s normal industrial relations processes – and understandably so.

I fully subscribe to the principle that the Gardaí and the Army should not have a right to strike, given the significance of their roles and their importance to our safety and security.

However, if we are to ask them to surrender a very important and powerful industrial relations tool, we must also ensure that this does not weaken their ability to negotiate fair rates of pay and good working conditions.

I think the GRA are fundamentally wrong to threaten industrial action, not to mention their being possibly in breach of both the Garda Síochána Act 2005 and the Garda Síochána (Discipline) Regulations 2007, but their deep frustration and absolute exasperation is understandable.

As Gardaí see it, the State is telling them to follow a set of rules which it refuses to honour itself.

In the view of the GRA the State has not lived up to its commitments in the Haddington Road agreement as the review of Garda pay levels and industrial relations promised under that deal was never completed.

The GRA now find themselves in a negotiating no-man’s land with the Department for Public Expenditure now having responsibility for addressing many of their grievances, but the conciliation and arbitration system devised to deal with such issues is based on the Department of Justice, a department which has gone without a permanent Secretary General for two years.

Added to this are disputes and commotions which have seen a Justice Minister, a Departmental Secretary General and a Garda Commissioner resign, retire or relocate and a series of statements from senior Garda officers which suggest that all is well and everything and everyone inside the force is hunky-dory.

Is it any wonder their morale is low? And all that is before you even get to the subject of pay rates.

Kind words and high praise from Ministers and Deputies during Leaders Questions and Dáil debates is no substitute for good pay. A starting pay of €23,750 is not generous.

Yes, there is range of allowances (over 50 as far as I know) and, according to one calculation, a new Garda can probably expect to get allowances for unsocial hours etc. equal to about 25% of their salary – but that is still a low basic rate of pay.

By announcing four days of industrial action in November, the GRA has put itself on a hook which the Minister and the government must assist the GRA to prise itself off.

Mainly because we cannot have a situation where Garda go on strike, but also because this Minister has played some role, via inertia and listlessness, in creating the conditions that allowed it to happen.

24 thoughts on “Between A Cop And A Hard Place”