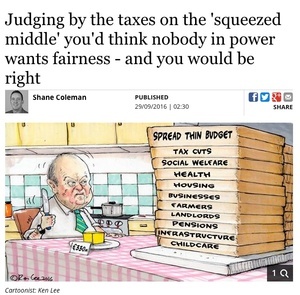 From top: Shane Colemen in the irish Independent; Michael Taft

The debate over the ‘squeezed middle’ is one of the more ill-informed and cynical you’ll come across. It is led in many cases by politicians and commentators who make assertions without substantiations, claims without facts; all of which leads to policy proposals that are at variance with equity and economic efficiency.

In many cases the numbers are just made up to rationalise a pre-determined policy preference.

In short, it’s a terrible debate.

The problem starts with the definition of the ‘squeezed middle’. This should be a relatively straight forward statistical issue.

If we are looking at ‘income earners’ (PAYE employees or the self-employed) we can go to the Revenue Commissioners database for a rather crude but revealing headcount.

There are a few problems with these Revenue numbers.First, ‘married couples with both spouses working’ are counted as one tax unit. Therefore, in this category, an income unit of €30,000 could actually mean that each spouse in the household earns €15,000 (or any other variant).
Second, these numbers include pensioners who have taxable income such as an occupational or personal pension, investment and property income. Most pensioners would be at the lower end of the table.

Third, the table includes churn. People who come into the tax net by taking up a job may do so only half-way through the year so the tax unit may refer to six months. Similarly, with people exiting the workforce.

We can try to adjust for some of this by disaggregating couples with two incomes. When this is done, we find the median wage falls to €25,200. We still have, though, the problem with pension income and churn.

A number of commentators prefer to focus on ‘full-time’ workers. I’ve never been convinced of this approach as it excludes so many part-time or near-full time workers.

Nonetheless, let’s work this, adjusting for couples with two incomes and excluding all those earning below €15,000. Even doing this we will be including some part-time workers (e.g. someone on €20 per hour working 20 hours a week will be above this €15,000 threshold).

From this we can estimate the median wage to be €32,050 with 50 percent earning below that amount. The middle is still very low.

So what is the squeezed middle?

The OECD uses a formula to define the broad middle: between one-third below to two-thirds above the average (median) wage.

Using the median wage for all income earners (the first table above) we find the squeezed middle to be between €18,500 and €46,000.

This puts the issue of helping the squeezed middle in a new perspective.

We would have to look at things like the minimum wage and living wage, strengthening and extending Joint Labour Committees for all low-paid sectors, increasing social protection programmes such as the Family Income Supplement – in addition to affordable childcare, affordable rents and lower public transportation costs.

Note that most of this doesn’t even get mentioned in the debate over the squeezed middle.
But there is a big, big caveat in all this.

There are a lot of people in society who are not included in the Revenue database because they are not PAYE employees or self-employed: most pensioners, carers (mostly women working in the home), the ill and disabled who can’t work, and those out of work. They should count, too. If they did, the squeezed middle would be a lot, lot less.

For instance, in 2014 the median household income was €40,336. It should be remembered that this includes all income from all people in the household, including social protection income (e.g. Child Benefit, rent supplement, etc.).

And the figure above includes employers’ social insurance (an accounting convention). If you remove that the median household income is closer to €37,700. 50 percent of households earn below that amount.

This is not to say there are not issues in these above average households. There may be a number of children, high debts from a Celtic Tiger mortgage, etc. But we need to keep a perspective. And to do that is by first getting a robust handle on what we are talking about.

IF we do that, we will have a better chance of getting the policy right.

32 thoughts on “Myths Of The Squeezed Middle”