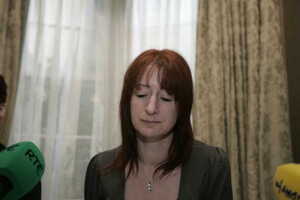 Further to revelations concerning the treatment of Garda whistleblowers by senior members of the force Clare Daly went on RTÉ Radio One’s Morning Ireland earlier to call for the resignation of Garda Commissioner Noirin O’Sullivan.

Cathal MacCoille: “The Tánaiste and Minister for Justice Frances Fitzgerald is considering allegations made by two Gardaí regards what they say is a campaign against them run by senior Gardaí. We asked the Minister to appear on the programme, she wasn’t available. Independent TD Clare Daly met the two gardaí a short time ago. I asked her outside the obvious limitations of speaking outside Dáil privilege what the two Gardaí had said to her about how they were treated.”

Clare Daly: “I suppose it fits in very much with what we’ve been saying, about the huge gulf between public statements of the Commissioner offering support to whistleblowers in the force, and what goes on behind the scenes.Now, we would be aware for some time now that the people making protected disclosures have been subjected to bullying and harassment.

What is so shocking is we’re seeing a lot of what they’ve been saying and what they’ve experienced completely vindicated, in the most shocking terms by one senior officer who admitted that he played a part in that, and in essence what’s been said is that there was a deliberate and organised campaign to annihilate this whistleblower, word came down from the top that he be crushed.

He had to be discredited, inaccurate information was given about him in the most horrific way, text messages were sent to Gardaí, people in the media told “you don’t want to be talking with him now, you know all about him, hint hint”, with some more graphic detail beside it.

Politicians, who I think need to come clean, also got the message about him. What it was, was an attempt to isolate and crush this man, because he had the audacity to speak up against the hierarchy, and I suppose the most serious part of all of this, was that, the claim is, it was done utterly with the knowledge of the former and present Commissioner.”

Mr MacCoille: “Now, we have to point out that what the Commissioner has sent, and what I see here in the Examiner, is that she’s not going to comment on any particular protected disclosure, but she again said she welcomes any protected disclosure, and that she has expressed her support for employees with issues and concerns. She has actively said (the aforementioned). You, from what you hear… are you at the point where you don’t accept what she’s saying?”

Ms Daly: “I was at that point long ago. I know for a fact that people that have come forward under the watch of Commissioner O’Sullivan with issues and concerns have had no contact from her at all in relation to their claims. People who in their stations have been doing the bullying have been included on the promotions list, while they are out sick from work, isolated, harassed, on very low pay.

The reality is for those people is the complete polar opposite of what the commissioner has said. And in fairness, the O’Higgins report itself gave evidence of the gulf between statements and reality. Because the O’Higgins Commission showed that despite the statements made, the instruction of the Commissioner’s legal team was very much to attack the character of Maurice McCabe. I don’t accept it all, that’s not the reality.”

Ms Daly: “Well, once the O’Higgins reported was published, myself and Deputy Mick Wallace called for the Commissioner to go. I think that is even more the case now, because, let’s not for get, the civilian head of the Garda Síochána made a Section 41 complaint to the Minister about the treatment of whistleblowers, we know that’s been on the Minister’s desk.

The main whistleblower that has come forward under the reign of the current commissioner have written four times directly to the Minister about the problems he has faced. What more information does the government need before it should take action?

I think the Commissioner has to go, and if the Government doesn’t deal with this, then the Minister will find herself joining her fairly quickly.”

MacCoille: “But I’ll make the obvious point to you, that you’re accepting the allegations, that you’ve met the whistleblowers, and read the report in today’s Examiner that senior officers mounted a smear campaign with approval. But you seem to be accepting one side of the campaign and not hearing the other, the Commissioner’s side. She says she’s behind whistleblowers, and will support them.”

Daly: “I’ve been hearing that for two-and-a-half years, and if it was just an isolated report that landed out of the blue, there might be some credibility in that approach. But what we have now is an avalanche, we have the treatment of the previous whistleblowers, we have the revelations of O’Higgins, we have the civil head’s Section 41 complaint. It goes on and on and on.

We’ve seen, and met, and know some of the whistleblowers quite well. Their lives have been destroyed, their families have been brought into the loop and targeted in the most vile and shocking of ways.

Y’know, the gas thing is, when I was talking to some of them yesterday, and they were reading the report. Over the years, a lot of them thought, ‘are we being paranoid? Maybe we’re overstating it or exaggerating it?’ Y’know what, they didn’t even know the half of it. While that was comforting it was also really shocking as well, and everybody ought to be worried.”

Previously: When The Whistle Blows

They Tried To Blame Maurice For Everything Whose Law Is it Anyway?