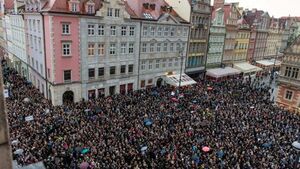 Polish politicians have withdrawn draft legislation that would introduce a near-total ban on abortion, in a hastily arranged vote that marks the first major domestic setback for the ruling conservatives and follows massive street protests.

Up to 100,000 women dressed in black protested throughout Poland on Monday against plans to tighten the country’s already restrictive abortion rules.

Right-wing and liberal parliamentarians in the 450-member lower house joined forces to vote 352 against 58 to reject the controversial bill, with 18 abstentions.

14 thoughts on “Choice of The People”