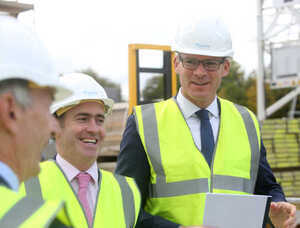 Public agencies, not just local authorities, have the land. We have the workers ready to build. and we certainly have the need.

The recent Saville Report, A Rent Forecasting Model for the Private Rented Sector in Ireland, should be a wake-up call to all policy makers.

Based on the relationship between private sector rents and the vacancy rate (the number of vacancies per 1000 rental units), Dr. John McCarthy estimates that rents will rise over 20 percent over the next two years.

Yes, there is a current rent freeze. But this doesn’t apply to new units coming into the market – and supply is growing, albeit at a slower rate than demand. Nor does it apply when a unit becomes vacant – when the current tenant leaves. And the freeze is only temporary and, unless extended, will be gone in less than two years.

Given that rents in Dublin rose by 10 percent in the last 12 months with rents rising faster outside Dublin (e.g. Cork rents grew by 15 percent), Dr. McCarthy’s prediction is reasonable.

This is not good – for tenants, for the economy or for the Exchequer; the Government’s Housing strategy is premised on placing the majority of those on social housing waiting lists in private accommodation. Rising rent supplements for more people would seem to be in the offing.

Though the Government is set to publish proposals regarding the private rented sector in a few weeks, the early signals are not promising.

Rather, he confined his response to Approved Housing Bodies which the the National Economic and Social Council stated were incapable of dealing with the scale of the problem.

Third, the only budgetary measure regarding rent was to give a tax-break to landlords, many of whom have exploited market conditions to drive up rents to already unsustainable levels.

Let’s cut through this morass. While the delivery vehicles and planning logistics can be quite complex, the basic approach is rather simple: build units and rent them. Here are three models that could be developed – in both the best and worst case scenarios.

Cost rental accommodation is just what it says – rents based on costs, not market-pricing. Take the cost of building/acquiring a unit with interest payments and amortisation, add in maintenance costs, property tax and a small percentage for a sinking fund – and charge rent at that level. Subsequent increases would be confined to a rental-inflation index to create certainty and tenants would have the full range of rights regardless of the law. This is the basic model pursued in other continental European cities. The NESC (in the link above) devoted an entire paper to this model – which could cover not only low-average income earners but those on the waiting list as well, creating a ‘unitary’ model where the distinction between public and private is blurred.

Even more provocative is the hybrid limited-equity model. In this instance, a person purchases 50 percent of the equity in the house and pays a monthly rent. So for a two-bedroom house costing €205,000 (not counting site costs or infrastructure), the owner/tenant would pay half through a mortgage and pay an additional ‘rent’. The owner/tenant would ‘own’ the house like any other owner but would only have to come up with smaller upfront costs. However, the house or apartment would be non-speculative which means that when the owner/tenant leaves the premises they would only receive their original mortgage which would be inflation-indexed. They could not sell their equity on the open market, nor could they release equity through another mortgage (unless the collateral was on some other asset); they could not automatically pass it on through inheritance or gifts or sub-let it out. In other words, it would be non-speculative housing but one that could be owned for life.

In this model, a tenant pays an upfront amount to the owner/landlord for the ‘right to own’ a property for a set number of years. Lorcan Sirr has written about this model as it applies in Spain. When the contract ends the property reverts back to the owner – which can be a public, private or cooperative landlord. Temporal owners have all the rights and responsibilities of the property: they can sell the contract or leave it in a will – until the end of the ownership period.
The value to the tenant is certainty of tenure for the period. The value to the landlord is that they have been paid for a certain period (no vacancies, no looking for new tenants, no missed monthly rents, etc.). Further, tenants usually take care of property that they are going to reside in the long-term.Here’s an example: a tenant purchases a 10-year contract for a house/apartment. They get a mortgage for €90,000 and pay it over to the owner/landlord. The monthly mortgage payments would be €870 to €905 per month. This would remain constant throughout the ten years.

The best-case scenario would be if these models could be done ‘off-the-books’; that is, the cost of construction would not be a cost to the Exchequer. This could be done, as in continental European countries, through public housing associations. These would operate commercially at arms-length distance from the central and local government – though local governments could establish these associations by applying for Approved Housing Body status.

Even in this case, the state would still be involved through capital grants and, in the case of temporal ownership, provision of low-cost mortgages.

In the worst-case scenario these models would be on the books. However, this might go no further than the initial once-off capitalisation – the housing associations would still be commercial, albeit not-for-profit, entities. It would also allow for non-market transfers between public agencies (e.g. derelict / vacant land owned by one agency transferred to a housing association).

There is also the possibility of a state Rent Benefit which could be tied to income. This could be paid to all tenants of cost-rental models – whether in the public, private or non-profit sectors.

This would ensure that the Rent Benefit doesn’t inflate the market as it would be paid in regard to rents that are controlled by costs and not subject to market pricing.

In all probability it would be a combination of both. You would start up models, test their capacity and reform them to take them off-the-books. This experimentation would, therefore, entail both tenure and financing models. However, these models would not be a substitute to social housing building but a complement.

The main thing is to start building – and renting, long-term leasing or selling at affordable prices. Public agencies, not just local authorities, have the land. We have the workers ready to build. And we certainly have the need.

Now all we need is a bit of imagination.