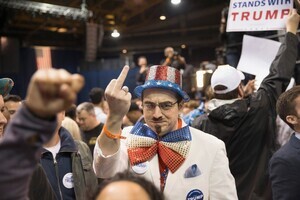 Instead of addressing the reasons why anger has been produced, the successful political strategy now seems to be to ride this anger.

For about fifty years not a lot has changed in the art of electioneering in Ireland. Most campaigning revolved around the after mass speech from an open deck lorry.

It was during the 1973 Presidential election that American style electioneering was introduced here with gusto. The late Seamus Brennan, then General Secretary of Fianna Fáil, felt that campaign needed some pizazz.

Balloons, streamers, buttons, printed t-shirts, even campaign songs were introduced to entice voters on whom the ever more faded oratory of the past was failing to move.

The 1977 General Election campaign, the one for every voter in the country election, completed this transformation. From then on everything American had to be adopted.

It has led us since to the politics of the lowest common denominator. One feature of this has been government by focus group. Killing any initiative, discouraging any out of the box thinking. If it couldn’t be approved by the marketing gurus with their groups of guinea pigs, it wouldn’t be worth running with.

This in turn has led to the rush to the centre, and with that the bunching of political parties to the point of being virtually indistinguishable from each other.

Bunching in the centre, and the near total reliance on focus groups, has increased the distance between the governed and the governing. Who needs informed consent when the straws in the wind can be gleaned through the best in up to date political technology?

At least that has been the theory. The distance created by the politics of the focus group has generated huge reservoirs of anger, an anger which may become the next trend US electoral trend we are about to follow.

Instead of addressing the reasons why anger has been produced, the successful political strategy now seems to be to ride this anger. Echo its incoherence. Never to verify its veracity.

Always to play upon difference. Vilify, demonise, objectivise, criminalise and especially dehumanise anyone who dares to speak, much less think otherwise. Dumbed down Trumped up politics. It’s coming our way soon.

It isn’t though a formula that is unique to the US. We are seeing it in the behaviour of the Brexiters, Le Pen in France, Wilders in The Netherlands, AfD in Germany and The Freedom Party in Austria.

However it is in the US now that we are seeing it at its most ugly, most blatant, and to its most obvious logical conclusion.

Conclusion is what will follow. But neither should we succumb to the political snobbery of upholding some Platonic ideal of restricting voting to those deemed to be educated enough. Informed consent through mass democracy is still our only hope.

Life isn’t simple neither should democracy be.