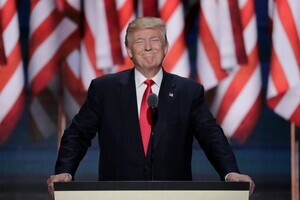 Winning the Presidency while not getting more votes than your opponent does suggest that Trump the populist is not so popular.

I closed last week’s Broadsheet column with the line:

“…the furore and turmoil of this divisive and nasty campaign will not end with the result. If anything, it is likely to get worse. The next President may well be faced with a task and a challenge which the conduct of the campaign has ensured they cannot fulfil.”

Though this came at the end of a piece where I predicted that Hillary Clinton would win, this part will remain the case for some time to come.

While, as Micheál Martin observed this morning on RTÉ’s Today with Sean O’Rourke, there is some evidence of moderation in the interviews that Trump has given since his election, that evidence is slight and is very far from conclusive. At the moment it is a hope, rather than a firm belief.

You know you are clutching at the faintest straws of hope when you view the appointment of the ultimate GOP and Washington inside Reince Priebus as Trump’s Chief of Staff. It is a key appointment and does suggest that Trump grasps the realities of the balance of powers in Washington, but its truer significance may lie in the opprobrium Trump was prepared to endure by this appointment.

As one of the more right wing and strident of Trump’s original band of political advisers, Roger Stone, tweeted when word of the announcement leaked out: “the selection… would cause a rebellion in Trump’s base. #RyansBoy”. Stone’s anger abated when he later learned that Trump was also appointing alt-right, anti-semite Steven Bannon as a senior adviser and strategist.

The signals coming from Trump so far are mixed, at best. He may ease off on his plans to scrap Obamacare and his wall with Mexico may not be a wall, but he does not plan to quickly shift to the centre and be the President of those who voted for him and those who didn’t.

Which brings us to one of the myths of the recent election, namely that Trump has created some mass popular political movement in the United States. As I have been saying here since last June Trump was riding a zeitgeist not of his own making.

While there was a sizeable chunk of voters, including the deplorables, attracted by his Putin-esque strong man message that he alone could save the US, the key swing voters viewed him a way to remind Washington and the big cities that their communities could no longer be ignored.

The division in America is as much geographic as it is class based. Look at a map showing the voting levels county by county and you will see that the main schism in today’s USA is between the big urban centres and small town/rural America: the so called “fly-over” communities.

These are the areas who feel both left behind and looked down upon, literally and figuratively. They are seeing what economic activity there is being concentrated on the big urban centres. It is a phenomenon we can relate to here.

As Enda Kenny discovered a few months ago, you cannot sell the “Keep the Recovery Going” message in areas which have yet to feel the recovery. Not only does the message not chime with these voters, it smacks of protecting the status quo

Trump did not start a movement, but he very effectively tapped into a great deal of hurt. He reached out to those disappointed by how trade agreements had shipped their jobs to Mexico and beyond and spoke out for them. He did the same on globalisation, on social change and offered to be their champion. The “those” and “them” in the last two sentences primarily refers to white, smalltown/rural Americans.

But while his appeal worked and he did undoubtedly switch people who voted Obama in 2012 to support him in 2016, Trump’s appeal was not as widespread and far reaching as he and his surrogates would have us believe.

This part of the story will slowly emerge as the full and final details of the results come in. As it stands (at the time of writing this), on the national popular vote – Hillary Clinton is about 1% ahead of Trump – approximately 600,000 votes. According to projections by Nate Cohn and others she may end up ahead by over 2 million votes – a margin of 1.5%.

Clinton leading Trump nationally by 1-2% is in line with most of the main polls and is certainly within the margin of error.

My own “Hillary will win” prediction here last week was based on my own guestimate that she would get 64 million votes and Trump would win 62 million – on this calculation I gave her 290 Electoral College Votes. I felt he would win Florida and Ohio (and said so on Twitter), but was confident she would hold traditional Democrats states like Pennsylvania, Michigan and Wisconsin. I got that part wrong.

This is precisely where Trump won the Presidency and, when the final numbers are in, he may have done it by about getting less than a hundred thousand people in these States who voted Obama in 2012 to swing to him.

This was a specific and targeted operation – not some massive popular groundswell.

The Trump shift was not limited to this, he did gain more votes from Hispanics than expected, esp in Florida, but without those 100,000 so voters in WI, MI and PA he would not be President. But the fact is that he did and that a much weaker Democratic party campaign and disconnected messaging in these States allowed this.

This does not invalidate the result. Presidential elections are decided State by State with a weighted (not proportional) Electoral College deciding the result. Donald Trump will be President – there is not a doubt about that. He won the election based on the rules agreed and decided well in advance. But – winning the Presidency while not getting more votes than your opponent does suggest that Trump the populist is not so popular.

As a colleague of mine remarked on Twitter yesterday:

“The victory of Trump resembles the victory of Morsi in Egypt: suddenly their bigoted supporters think the country is theirs & act like it.”

Trump will need to do a great deal more than look down the lens of a TV camera and say stop. It will take a lot more and a lot longer to calm the turmoil stirred up by the campaign of the past year and a half. 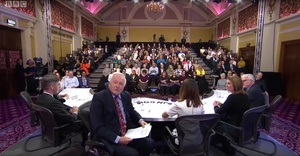 29 thoughts on “The Unpopular Populist”