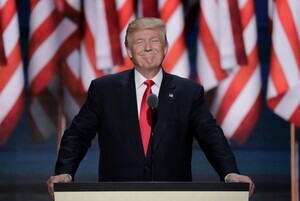 We are in an unprecedented time of political upheaval. All the political rule books are being torn apart. Anything is possible.

What is the impact of Trump’s election on Irish politics? Could we see an Irish Trump or new right-wing party elected into the Dáil or even lead a new government?

This potential nightmare scenario is possible given the economic crisis and distrust in political parties and government in Ireland. However, this means that there is also an opportunity for a new progressive political movement in Ireland that would direct people’s anger and frustration towards achieving equality and social justice rather than fuelling hate and the scapegoating of immigrants.

Firstly, does the current state of our economy (and our future economic situation) provide the basis for an anti-establishment populist politics? The reality is that it does.

A significant proportion of people remain excluded from the so-called ‘economic recovery’. It is increasing inequality. Those at the top are gaining the most from increases in income and wealth. Small wage increases will make little difference for people struggling with debt and crippling costs of living (particularly families with children).

A third of our population suffers material deprivation, a fifth of households cannot cover their monthly bills, 86,000 are still in mortgage arrears, while unemployment disproportionally affects young people and disadvantaged rural and urban areas. A lot of the new jobs are ‘precarious’ – low wage, short term and insecure.

On top of this, we have the lack of affordable housing for renters and those looking to buy their home while over 6,000 are homeless (2,500 of those children). We have a two-tier apartheid health system and continuing emigration. Things are extremely difficult for most lower income and working class families and an increasing proportion of the ‘middle class’. The future is not just uncertain, but for many it is terrifying, and parents cannot see a positive future for their children in Ireland.

Not to mention the injustices of the bank and Troika bailouts – where the ECB and EU lumped us with the costs of bailing out the French and German banks. Fianna Fáil, Fine Gael and Labour then ensured we paid for it through enforced austerity that devastated our public and community services and investment.

And we still pay up to €2bn a year extra of interest on our debt solely to cover the costs of the bailing out the banks and the European financial system. The scars and wounds of the crash, austerity and the bailouts run deep while the political establishment has shown that it has no interest in understanding this, or responding in a progressive manner.

This also explains why the Irish people have completely lost faith and confidence in our political institutions of the Dáil, the government, and political parties. The Eurobarometer (EB) survey of the Irish public carried out in November 2015 (below) shows the collapse in trust after the crash in 2008 [i] and again after the election in 2011 when Fine Gael and Labour failed to fulfill their election promises.

It highlights the collapse in trust in political parties.

This disconnect between the people and political parties and government is shown by that fact that just 65% of registered voters actually voted in the general election in February. In Dublin just 62.8% voted (which is down from 68% in 2011) [ii].

This means that over one million registered voters did not vote at the election – which is twice the number who voted for Fine Gael. While the two dominant conservative parties, Fianna Fáil and Fine Gael, got their lowest combined vote, falling for the first time below 50%.

And little has changed since February.

The most recent Irish Times opinion poll showed that in terms of their core vote, Fine Gael had 20% and Fianna Fáil, 21%, while Independents had 20 per cent and 19% were undecided. These figures show, firstly, the large section of the population who are alienated from the mainstream parties (non-voters, independents and ‘undecideds’) and thus potentially open to new political alternatives, and secondly, that we are in a period of political volatility with support for parties changing dramatically in short periods of time.

But the election and recent opinion polls also show that the anti-establishment mood in Ireland is more supportive of broadly ‘left’ policies than right-wing Trumpism. Just contrast the increase in electoral support for the left (AAA/PBP and Sinn Fein) to the failure of the right-wing Renua.

The conservative tax-cutting and austerity agenda of Fine Gael was also rejected in the election as people sought investment in public services, particularly health and housing. This is backed up by the recent polls which showed people wanted the Budget to prioritise investment in healthcare, housing/homelessness and childcare over tax cuts.

This is why Fine Gael and Fianna Fail are panic-stricken over the public sector unions threatening action over pay. They are worried that the defiant spirit of the water movement is spreading across Irish society as people are no longer just passively accepting growing inequality and political corruption.

They know that the corrupt conservative establishment is in major trouble. Of course if this approach fails to deter the increase in public support for the Left, where will they turn next to blame for the mess and inequality the government has caused?

It won’t be the corporate tax avoiders or growing wealth inequality. It is more likely to be the immigrants, Travellers, or ‘welfare scroungers’. And that is how Trumpism could develop in Ireland – in the near future a Fine Gael or Fianna Fail party declining in support in the polls or some revitalised Renua, will try whip up hate and blame immigrants (or the homeless or public servants or the militant ‘left’) for the on-going misery faced by so many people excluded from the ‘recovery’.

So far, here in Ireland, we have not seen this blaming of immigrants for the crisis. This is largely thanks to the water movement and the left political parties and independents who have focused people’s anger, correctly, on austerity, the bailouts, the ‘neoliberal’ privatisation model and thus offered a political alternative to the establishment parties, particularly Labour, who failed to stand up for ordinary people.

However, while the existing left parties (Sinn Féin, AAA/PBP and the Social Democrats) and independents are doing a good job, February’s election showed that combined, they achieved just under 20% of the vote. That is significantly short of the required support levels to deliver a progressive, equality orienated, government.

For all their own reasons the existing left are limited in their ability to win the support of a majority of people in Ireland. This means that there is a political space open to be taken by conservative right wing populists who could then gain a majority support if the left parties fail to take that space.

That is why now, more than ever, there is a need for a new, genuinely progressive, political movement in Ireland that can reach out and win the support of a majority to challenge the politics of inequality.

Such a new political alternative, if it is to be successful, must go way beyond what the existing left is doing and reach out to involve all those unrepresented – the non-voters, independents, the undecideds, the trade unionists, small business people, young people, the excluded rural and disadvantaged communities. It needs to break the ‘consensus’ framework of Irish politics –and offer a way of doing politics, a new vision for Ireland, beyond the narrow left/right and civil war divides.

Some might ask if there is likely to be support for another political party on the left? The answer is likely to be no there isn’t. And that is why if a new alternative is to be successful it can’t just be another traditional party. To fill the political space and gain public support it will have to be a new, flexible, open, hopeful, broad, and inclusive political movement not a party.

To be successful in this age of social media and citizen empowerment it should be citizen-led, a cross country (rural and urban), cross society and social class alliance, with no one particular group or sector dominating it.

It will have to present as its aim the unity of the people against the political establishment and their unequal and destructive policies. Like Right2Water it must be something that, when ordinary Irish people look at it, they are inspired and want to support it.

I have shown here that the political space is clearly there for such a new progressive alternative. A significant proportion of the Irish population do not feel represented by the existing parties. It is thus a time of opportunity and possibility for new political forces to emerge and capture the public mood and attention. The many social and economic crises, particularly growing economic inequality are likely to continue into the future.

This shows the growing need for a new people’s movement of unity and solidarity to address this. And, it would not have to start from scratch. There is a large potential activist base in the water movement potential support from progressive Independent TDs, civil society groups (such as the Right2Water unions), academics, community workers, artists and many others.

We are in an unprecedented time of political upheaval. All the political rule books are being torn apart. Anything is possible. The victory of Trump should serve as a warning of what can happen if there is not a progressive political alternative available to people. Can we make sure that mistake is not repeated here in Ireland?