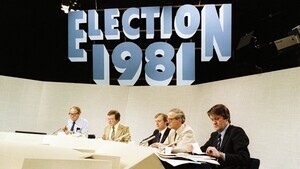 From top: RTÉ coverage begins for the first of five general elections held during the 1980s; Dan Boyle

Each Great Leap Forward is followed by several steps back.

I first cast my vote in 1981. Ronald Reagan was the US President, Margaret Thatcher the British Prime Minister, and Leonid Brezhnev was General Secretary of the Central Committee of the Communist Party of the Union of Soviet Socialist Republics.

In the general election of that year the Trinity of Irish politics – Fianna Fáil, Fine Gael and the Labour Party, had won its usual 95% of the vote. Those of us coming of age then had little expectation that things could change quickly, or indeed change at all.

There were small signs indicating otherwise. A handful of interesting independents were elected. In Limerick, a speak as you found him socialist, Jim Kemmy, was arousing interest. The most that could be said about Seán Dublin Bay Rockall Loftus was his name.

Noel Browne was being elected for his fifth and final political party, Socialist Labour. Sinn Féin, in its Workers Party incarnation, won its first seat since 1957. The first Sinn Féin TD to take their seat in the Free State parliament.

The abstentionists were represented by the election of two H-Blocks hunger strikers. Those behind their election would later claim sole proprietorship of the Sinn Féin handle.

The Abortion Referendum of 1983 allowed some of us at least to fly a flag for another Ireland, even if we never believed that holy, Catholic Ireland was ever possible to shift.

It wouldn’t be until 1990, with the election of Mary Robinson as President, that any election I invested in yielded a positive result.

The nineties and onset of the millennium brought social change at a rate that had barely seemed possible in the previous seventy years of independent statehood before that.

Maybe those of us of a progressive bent got greedy, wanting more change more quickly. More likely having been denied change for so long, progressives have forgotten that change is never relentless nor is it linear. Each Great Leap Forward is followed by several steps back.

I fear that once again we are entering a dark age. The momentum has been gained, and the agenda has been won back by reactionaries. Hard won rights will recede amid much gnashing of teeth.

Despite that I’m not overcome with any sense of impending apocalyptic doom. Or with the feeling of powerlessness of the 1980s. Let them do their worse. They cannot roll back everything. When the argument has been won again, we will be starting from a place still far ahead from where we had begun.

Social justice can’t be guaranteed but it is inevitable. For now, at least temporarily, this is the new normal. We had better get used to it, but not for too long.

9 thoughts on “The New Normal”