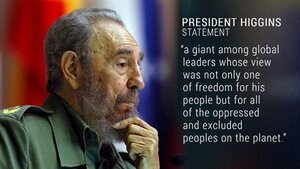 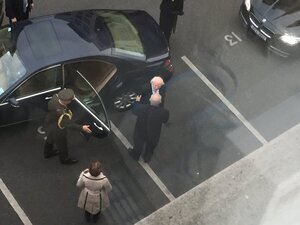 The human rights abuses in Cuba are not some historic inconvenience that can be poetically euphemised.

There are several immutable rules in politics. One of the most important ones says: when you are in a hole: stop digging.

The rule applies outside the rarefied atmosphere of the corridors of power. It even extends to those residing in 18th century palatial residences in the Phoenix Park.

Trying to pretend that President Higgins’ statement on the death of Fidel Castro was anything other than fawning and unbalanced is to toss aside the silver shovel and bring in a JCB.

Defending the President’s statement from criticism a spokesman said that the statement had clearly referred to the price paid for social and economic development in terms of civil society and the criticisms it brought.

The relevant sentence reads: “The economic and social reforms introduced were at the price of a restriction of civil society, which brought its critics.” Twenty (20) words in a statement that was about 430 words in length. That is hardly balanced, especially when you consider the passivity of the language employed.

Styling the use of murder to acquire and maintain power as just a “restriction of civil society” is naive dissimulation at best and an insult to defenders of human rights at worst.

While some may question the scale of the horrors Castro inflicted, like Stalin or Mao he had absolutely no compunction about lining up thousands, if not tens of thousands, of men and women in front of the infamous ‘paredón’ (the wall) for summary execution. These included former revolutionary comrades such as William Alexander Morgan.

The human rights abuses in Cuba are not some historic inconvenience that can be poetically euphemised. They continue to the present day. In its 2016 report on Cuba the noted human rights NGO Human Right Watch states:

Check the President’s twitter feed and you will find that President Higgins’ eulogy to Castro came just two hours after posting a link to his Mansion House speech given on Thursday last as part of the inauguration of the first global memorial to murdered human rights defenders.

I do not for even one second doubt the sincerity of the President’s ongoing commitment to human rights or of his lifelong work in this area, but I do question his judgement.

He damages these causes when he puts his simplistic and romanticised notions of the Castro legend ahead of the more complex reality – even under the guise of “de mortuis nihil nisi bonum” (don’t speak ill of the dead).

Castro was a divisive figure. To some he was the “scourge of the west” and the great liberator, to others he was a megalomaniac autocrat who preached socialism while living like a king with his own private island.

The fact is that he was probably both.

Sadly, our President does not see it this way. So, instead of issuing a statement that observed the diplomatic niceties by extending the sympathies of the Irish people to the Cuban people on their loss and noting Castro’s place in world history, our President opted to go much further. He decided to internationally proclaim a glowing and lengthy tribute – and all in our name.

President Higgin’s finished off his homage to Castro with an effusive flourish, stating that:

“Fidel Castro will be remembered as a giant among global leaders whose view was not only one of freedom for his people but for all of the oppressed and excluded peoples on the planet.”

I can understand how many young people in the 1950s and 1960s initially fell for the idealised version of Castro. He overthrew a corrupt, puppet regime in the face of US opposition and introduced massive agrarian and education reforms.

This was also the golden age of photojournalism. The early black and white photos of Castro and Guevara are iconic, portraying two young men standing up against the odds.

But there comes a point when you get past the bedroom poster version of world politics and see things as they really are. The real world is not so photogenic. It is murkier and less stark with many confusing shades of grey. In the real-world politics is conducted in prose, not in poetry.

The Áras brings many privileges, but they come at the price of the loss of many personal freedoms. This includes having to temper your own personal views and recognise that when you speak you no longer do as just a private citizen.

While the President has seemed not to grasp this point on several occasions in the past, something usually dismissed as Michael D. being Michael D., this time he has strayed further across the line.

This is not a resigning matter – but it does make one wonder if we want another seven years of these particular lines being tested?